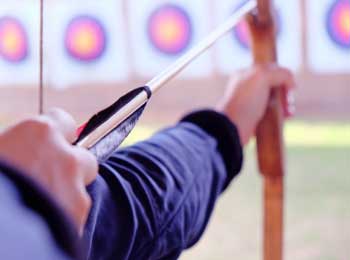 Once an accomplished young archer got to know about a Zen master who was famous for his prowess in archery.

Young archer was proud of his skills and went to Zen master and dared him to a test of their skills.

On the day of test, both came on decided place.


In first round, his arrows easily hit bull’s eye on his targets. In next round, he split the first arrow’s into two.

His proficiency was extraordinary..

“Think you can match that?”, he asked the old man condescendingly.

Instead of responding, Zen master gestured him to follow him higher up on the mountains. After walking for while, they arrived at a deep gorge.

There was an old unsteady log spanned the distance to other side.

Zen master serenely walked on to the middle of the log and then aimed at a distant tree. In a clean movement, loosed an arrow flew straight into the tree trunk.

“Your turn now,” said he, stepping back casually onto the cliff edge.

The youth stared into the chasm yawning below and trembled uncontrollably. He could not put a foot onto the log, much less take aim at anything beyond.

The master observed, “You have great control over your bow but little with the mind that lets loose the arrow!”

Moral:
One should Kill one’s own Ego to Attain True Power and Skill.