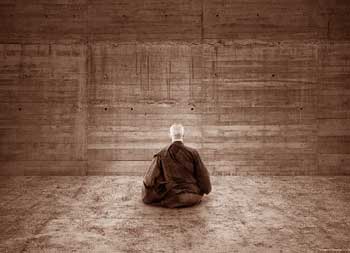 Once lived a Zen master Bokuju. He used to live inside cave alone most of time. He would sometimes loudly say, “Bokuju” his own name and the himself would say, “Yes, I am here.”

He would this anytime, day or night. There were some disciples who used to follow him. They would hear this. Disciples were not able to understand it’s reason.

So, one day one of his disciple asked him, “Why do you call your own name and then reply yourself to this.”


Bokuju replied, “Wherever i get into thinking, i have to remember myself to be alert, so i call my own name ‘Bokuju’ loudly and moment i can ‘Yes, i am here’.. All the thinking and anxiety disappears.”

When Bokuju got old, in his last days for two or three years, he never called out his own name.

Disciple asked, “Master you used to say your name all the time but now, you never do this. Why so?”

Bokuju replied, “Because Bokuju is always here. He is always there, there for there is no need to call him. Previously anxiety would take me, cloud all over me. So i had to call ‘Bokuju’ and that moment anxiety would disappear.”

Learning:
You have to come to deep knowing of Your Own self and Mechanism of Inner Working. If you Become Alert, Anxiety will disappear. 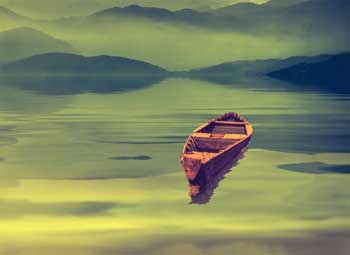 In morning, monk takes his boat out and rowed it to middle of lake. Then he closed his eyes and begin his meditation.

After a few hours of undisturbed silence, he suddenly felt bump of another boat colliding with his own. Monk kept his eyes closed but thinking about another boat, his anger started to rise.

Monk thought to himself that he came to lake so that no one would disturb him and still here came another boat and bumps into his boat, this thought made him angry.

Monk with his eyes closed, he sensed his anger rising and by time he was about to open his eyes, he was ready to scream at the boat man who dared to disturb his meditation.

But when he opened his eyes, he saw an empty boat that probably untethered and floated to the middle of lake.

At that moment, monk understood that the anger is with in him and it merely needs bump of an external object to provoke it out of him.

From then on, Whenever he came across someone who would irritated him or provoke him to anger, he would remind himself, “Other person is merely an empty boat, anger is with in me.”

You May Also Like: Salt in Lake – Unhappiness in Life

Search keywords: Zen Stories on Self Awareness – Bokuju Story about Being Alert, Why do We Get Angry Story, Anger Within Zen Stories with Life Lessons