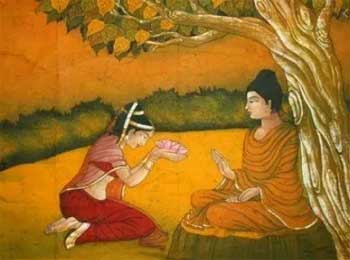 In Vaishali lived a famous courtesan Amrapali. She was very beautiful and was declared Nagarvadhu of Vaishali.

One day she was standing on her terrace and saw a young Buddhist monk who had nothing just a begging bowl but had tremendous presence, awareness and grace.

Moment she saw him, she rushed down to him and said, “Please. Accept my food.”


After offering him food, Amrapali said, “After three days, rainy season is going to begin and i invite you to stay in my house for four months.”

Young monk replied, “I will ask my master. If he allows me, i will come.”

After saying this he left.

Before young monk could reach assembly, monks who saw this rushed to Buddha and said, “Young monk has to be stopped. Amrapali has invited him to his house to live for four months… and a monk staying four months in a prostitute’s house…! it’s not right.”

Buddha said to them, “Keep quiet! let him come.”

Young monk came, touched Buddha feet and told him the whole story, “A woman has invited me to her house, she is a courtesan. She asked me to stay for four months in her house. Every monk will be staying somewhere, in somebody’s house for four months. I have told her that i ask my master, so i am here.. I will do whatever you say..”

Buddha looked into his eyes and said, “You can stay.”

It was a shock. Thousands monks who were there couldn’t believe that Buddha has allowed a monk to stay in a prostitute’s house. After three days young man left to stay with Amarpali and other monk started gossiping.

Buddha said to them, “You should keep silent. Four months will pass and i trust my monk. I have looked into his eyes – there was no desire. If i had said no, he would not have felt anything. I said yes.. He simply went.

Why are you all getting so agitated and worried?

Despite this, disciples thought, “Buddha is trusting too much. That man is too young and Amrapali is too beautiful. He is taking an unnecessary risk.”

She touched Buddha’s feet and said, “I tried my best to seduce this young monk but it was all useless. Instead he convinced me by awareness that real life is at your feet. I want to give all my possessions to the commune of your monks.”

Later, Amrapali became one of the enlightened women among Buddha’s disciples.

If Meditation is Deep, If Awareness is Clear, Nothing can Disturb it.

You May also Like: One’s Nature and Enlightenment – Buddha Stories