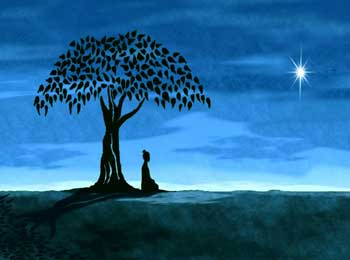 Long ago, a man went in search of Master. He was determined to find Master for himself, and for that he was even ready to go around world.

When he began his journey, just outside his village, he saw an old man who was sitting under a tree.

Man went to him and said, “You look like a wanderer… Are you?”

Old man replied, “Yes, i am a wanderer. i wandered all over the earth.”


Man thought to himself that old man look like right person to ask his question.

Man then said, “I want to be a disciple of a Perfect Master. Can you suggest to me where i should go? Where can i find him?”

Old man suggested a few address to him. Young man thanked him went on.

Man wandered for thirty years around the earth and he found no body who was up to his expectations. He dejected and depressed. He decided to come back to his village.

Moment he was entering his village, he saw same old man who has become very old now, sitting under tree and suddenly he recognized him as his Master!

He fell at his feet and said, “Why didn’t you say it to me, that you are the Master?”

Old man said, “But that was not time for you. You couldn’t recognize me at that time. You needed some experience.

Wandering around earth has given you a certain maturity, a certain understanding. Now you can see.

Last time you met me but you had not see me. You had missed. You were asking me about some Master. That was enough proof that you couldn’t see me, couldn’t feel my presence, you couldn’t smell the fragrance.

You were utterly blindly, hence i gave you some addresses, so you could go but even to be with wrong people is good because that how one learns.

For thirty years i have been waiting for you, i have not left this place, this tree.”

Young man was not young anymore, looked at tree and even more surprised because at that time he remembered that in his dreams, in his visions he was always seeing that tree and there was always a feeling that he would find his Master sitting under this tree.

He realized that thirty years back, he didn’t see tree, he met Master but couldn’t recognize him. Everything was ready but he was not ready.

One thought on “Young Man Search for Perfect Master..!”