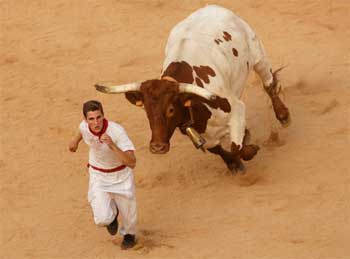 It’s a story of young man who wanted to marry beautiful daughter of farmer. He went to father to ask for permission to marry his daughter.

Farmer looked at him and said, “I will allow you to marry my daughter but you have to fullfil one condition.”

Further he continued and told him condition, “Son go out and stand out in field. I am going to release three bulls, one at a time and you have to grab tail of any of three bulls. If you can catch tail of any one of three bulls then you can marry my daughter.”

Young man went to field and stood there, waiting for bulls to be released.


The barn door opened and came out one of the biggest bull he had ever seen. So he decided to let this one go and wait for second bull. So he went over to side and let bull pass through.

Again next time barn opened for second bull. This one was bigger and even more fierce than previous bull. This time again boy thought that may be next one could be better choice so he ran to side and let that bull pass through.

Now door opened for third and came last bull. Boy got a big smile on his face. This was the weakest bull he had ever seen. So he positioned himself and was all set to take on bull and grab his tail. As bull came running by he jumped at exact movement. As he threw his hands to grab tail to his surprise this bull had NO Tail.

Moral:
When Life gives Opportunity, Grab the first one.

You May Also Like: Young Man Hard work and Success Story