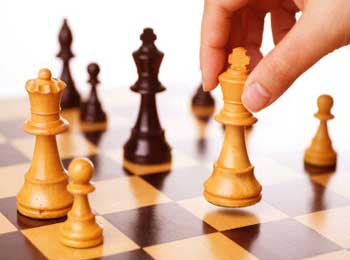 Once a young man belonging to a very rich and aristocratic family, came to Zen master. Young man told Master that he had known everything and indulged in every desire but then he got fed up with everything – fed up with women, wine, money.

He said to Master, “Now, i am fed up with world. I don’t understand what to do anymore. Is there some way that i can know myself? Who i am?”

Before master could reply, young man said, “I want to tell you that i am indecisive and can not continue anything for long time. I can not persist in anything.”

Master said, “Then it will be very difficult because long effort will be needed to undo all that you have done in past. But let me ask you one question – Have you ever been interested in something so deeply that you were absorbed completely?”


Young man thought and said, “Yes, there is one thing i am very much interested and that is Chess. That’s only thing saving me. Everything else has fallen away, only Chess in still with me.”

Listening to this Master smiled and said, “Then something can be done.”

Master called one monk who had been mediating for twelve years in monastery. He asked attendee to bring one chess board.

Monk was little acquainted with chess rules but being in meditation for 12 years, he forgot almost all about worldly things.

Master said to monk, “Listen, this is going to be a dangerous game. If you are defeated by this young man, i will cut off your head with sword.”

Young man became little uneasy. Just then Master turned to him and said, “You said that you like chess. You get absorbed in chess. Now, play with all you got because it’s matter of life and death. If you are defeated i will cut off your head.”

For moment, young man thought to escape but then if he ran away at that point, it would look dishonorable. So he agreed to play.

Young man started trembling, now it was not just a game but his life depend on his win. He couldn’t think. Monk who was sitting in front of him looked, serene and calm. Monk was playing calmly, with every step, death was coming nearer for young man.

After thinking this, with every passing minute, thoughts disappeared. Young man forgot about death and life. He became just a part of game, totally immersed in it.

At that time, only the moment existed, only present. Young man stopped trembling, his mind was no more there. Young man played so beautifully that his victory was certain.

Then suddenly, he looked at monk. He thought, “Twelve years of meditation, this monk had become like a flower. Twelve years of austerity – He had become so pure. No desire, no thought, no goal, no purpose existed for him. He is so innocent.”

Young man thought to himself, “If today, i get defeated and killed there is nothing disturbed, I am not worth nothing but if this monk get killed then something beautiful will be destroyed.”

Just at that moment Master upturned the table and started laughing. Master said, “Nobody is going to be defeated here. You both have won.”

Monk was already in heaven, no need to cut off his head. He was not troubled at all when his master said that his head would be cut off is he lost.

Then master said to young man, “You have won, your victory is greater than this monk’s. Now i will initiate. You can be here and soon will be enlightened.”

Young man said, “Please tell me what happened. I feel like i am not same young man who came to you few hours ago. That man is already dead. You have done a miracle.”

Master said, “Because death was so imminent, you couldn’t think, thoughts stopped. Death was so close by, thinking was impossible.

But then death was so near, there was no gap between you and death and thoughts need space to move. There was no space, so thinking stopped.

Meditation happened spontaneously. But that was not enough because that type of meditation which happens because of emergency will be lost.

When the emergency is gone that meditation will be lost. So I couldn’t throw the board at that moment, I had to wait.

Then I looked at your face. You were filled with bliss and your eyes became Buddha like. When you thought that It is better to sacrifice myself than this monk. This monk is more valuable than me.

Then I saw in your eyes the compassion arising and then you started to make wrong movements just to be defeated so that you would be killed and this monk saved.

At that moment I had to throw the board. You had won. Now you can be here. I have taught you both meditation and compassion.

Now follow this track and let them become spontaneous in you – not situational, not depending on any emergency but just a quality of your being.”