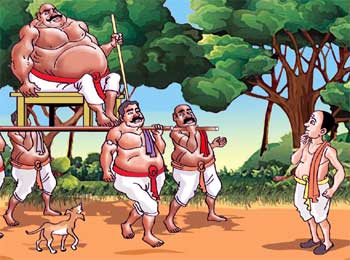 Once Raja Krishndeva, got angry with Tenali Raman and ordered him not to show his face.

One day, while walking, Raman saw that a tall, fat man being carried by four man. Procession was heading to palace.

It was Procession of a Wrestler from north who went to palace and called on King, “I am going around world to see if i can meet a man stronger than me. I am here to challenge Wrestler of Vijayanagara.”

King asked wrestlers from his Kingdom to get ready to face the challenger from the north and fixed a day for event.


After some days, minister informed to King that local wrestlers were reluctant to take up the challenge.

“Is there no one who can save honour of Vijayanagar?”,exclaimed King.

Now, there was only one man, only hope who could save honour of Vijaynagara, Tenali Raman but King had ordered him not to show his face.

So next day, came a visitor to King’s palace. His face was covered with black pot.

Seeing him King got angry and said, “Who are you? What is this nonsense?”

“Had i not warned you, not to show your face again?”, yelled King.

Raman replied, “But Maharaj, I am not my face to you. I have covered it before coming in front of you.”

At his response, King couldn’t help but laugh.

King asked, “What brought you to court?”

Raman said, “I want to take on this Wrestler from north.”

King was delighted to hear this and ordered all Wrestlers from Kingdom to report to Raman.

On decided day, Wrestlers of Vijayanagar, carried Raman on chair to the arena where challenger was waiting.

On his arrival, King signaled that contest could begin.

Raman stepped forward and said, “Maharaj, I want to challenge my opponent to do with open eyes, what i can do with my eyes closed.”

Wrestlers thought that it would be child’s play to do anything with open eyes, that his opponent could do with eyes closed.

So he nodded his head in acceptance.

Just then chair was bought in arena and Raman sat on it and closed his eyes and signaled his assistant.

At signal, assistant bought a bucket full of sand and splashed it on Raman’s face.

Then, Raman wiped his face and then opened his eyes. He bowed down to opponent and said, “Your turn.”

Wrestler was shocked. Raman’s assistant bought another bucketful of sand and took his position. Wrestler was trembled at thought of all that sand that would get into his eyes, if he were to keep his eyes open when sand will be thrown on his face.

“I concede defeat, Maharaj”, he said meekly and bowed to Raman and left.