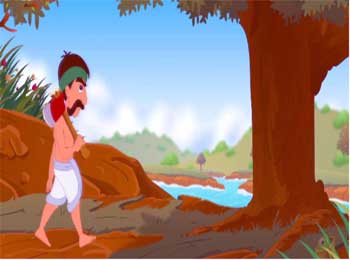 Once in a village lived two wood cutter Rohit and Sahil . Every morning they would go out to forest to cut wood to sell it to near by market. They both used to earn enough to survive.

One day while wood cutter were taking a break from their and sat to eat lunch, there one of them noticed a beggar who seemed very thin and exhausted.

As beggar was passing by he noticed them and begged, “I am very hungry, would you care to spare a few bites of food for me??”

Rohit felt pity toward him and quickly looked in his bag for a packet of food he had kept for later but before Rohit could give that to beggar, Sahil grabbed his hand and pulled him back.


Sahil looked toward beggar and said, “We have no food to spare. We both work hard all day long and have enough food to get us through the day. We can not give you what we are eating..

But if you wish i can lend you my axe and we both will teach you how to cut firewood. Then you can sell it and hope that at end of day you will have enough money to buy yourself enough food.

This way you can learn to earn a livelihood with dignity and hopefully never have to beg again.”

Beggar felt little disappointed but still joined them. Patiently Sahil taught him how to cut firewood and helped him. At end of day they went to market.

At first beggar had no success in selling those woods and began to get little angry saying, “It would have been much simpler if they had just share little food with me.”

While he was thinking a carriage pulled up before him. A person came down and purchased whole bunch of woods from him. Beggar was delighted and he proudly went to woodcutters to show them his earning.

Sahil took him to Axe shop and purchased him a brand new axe with a part of money earned by him. Beggar was happy. He thanked them and headed to an inn to buy some food.

After beggar left Sahil told Rohit, “Had you given the beggar some food, he would have eaten it quickly and would have been again hungry tonight.

By teaching him how to start his own trade in firewood, we have both taught him a skill, which will last him a lifetime. Now he will never go hungry again.”

There is a famous saying “Don’t give them fish but teach them how to catch the fish.”

You May Also Like: Hundred Camel Story (Problems in Life)

2 thoughts on “Woodcutter and Beggar (Must Read)”