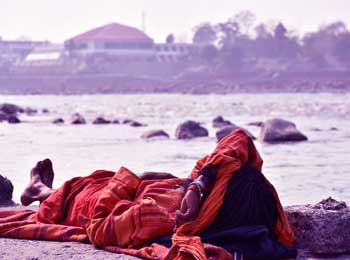 Once a Monk went to river to drink water. After drinking water, he laid down by river side resting his head on stone.

Just then a group of women came to fill water from river.

Seeing Monk resting, one of them said, “Hm.. Even after renouncing everything and becoming a monk, he couldn’t leave need for a pillow, even if it’s of stone, he kept it under his head as pillow.”

Monk heard those words and instantly threw that stone away.


Seeing this another woman said, “He became monk but still gets angry. Look, in anger he threw away that stone.”

After listening to her, Monk thought to himself, “What should i do?”

Just then third woman said, “This is river side. Woman like us will keep coming here to fetch water and will say one or other thing. If you get influenced again and again by their words then when will you worship God?”

Listening to this, fourth woman said very beautiful and wonderful thing, “Forgive me to say this, but i think you left everything but were not able to leave your ego.. so far it remains same.. Whatever the world says, you just keep worshiping God..”

Monk understood that and didn’t bother about what anyone said about him and went on to meditate and worship God.

Truth is that people job is to say one or other thing..

If you look up and walk, people will say – You have become ignorant.

If you look down and walk, they will say – You just don’t look at anyone.

If you close you eyes and pray, they will say – You are Pretending to pray.

If you look around, people will say that – He can’t even keep focus, his eyes keeps looking around.

At last if you blind yourself after getting upset because of all this, then this world will say that – You have to suffer because of your bad deeds.

It is easy to persuade God but it is impossible to persuade people. That’s why if you pay attention to what world will say then you will not be able to focus your attention. So be completely deaf to other’s comment and focus on your goal..

You May Also Like: Two Monks and a Woman Crossing River..!