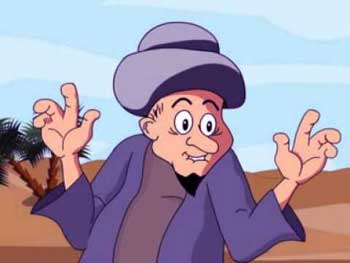 Once Nasrudin was working for an employer. Employer didn’t like the way he worked.

So one day his employer called him and said, “There is no reason for you to go to market to buy materials separate times – You can surely do it at once…”

Nasrudin didn’t said anything and left.


Some days later, employer got sick and asked Nasrudin to get a doctor. Nasrudin went out to bring doctor but when he returned he came back with two more people.

Seeing this his boss asked, “Who are other two people.?”

“Well, in order to save myself from making extra trips, When i went to bring doctor, I also brought the imam, in case we need to pray for your recovery and the undertaker, in case you die..!!”, explained Nasrudin.

Once Nasrudin’s cousin has to got out of town for long time to take care of some work and because of this he asked Nasrudin to look after his house.

His cousin used to send him letter and ask him well being of his house. Nasrudin used to reply him too.

One day, Cousin’s precious cat died. So Nasrudin wrote a letter to his cousin saying, “Your cat died..”

Reading that letter cousin was upset and replied with letter saying, “Where I live, we give people bad news more tactfully.

Instead of just telling me flat out that my cat was dead, you should have let me know me little by little.You could have started of by saying – Your cat was acting strange.. it was jumping all over place and then you could have finally broken news and said – You cat died.”