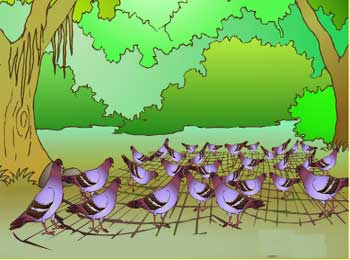 During daytime, pigeons used to fly all over the jungle, in search of food and water and before night fall, they used to come back to their nest.

One day, while searching for food, they saw rice grains spread on ground. All pigeons, at once decided to fly down and eat that rice grain.

But wise pigeon thought, “How could so much of rice be found in this thick forest?”. He got suspicious that it could be a trap laid by bird catcher and tried to stop all other pigeons but none of them listened to him as they were very hungry.


When all pigeon were done eating rice and tried to fly back, they realized that it indeed was a trap laid by bird catcher. Pigeons were unable to move their feet as it got stuck in net.

Wise old pigeon decided to sit on branch of a nearby tree instead of going down to eat rice grains.

Soon, bird catcher saw pigeons trapped. He chuckled, “Ah! So many pigeons, I will put them in cages and sell them in market.”

Wise pigeon saw bird catcher coming toward pigeons trapped in net. On other hand, pigeons were desperately trying to free themselves from the net by pulling net in their own direction.

Nothing could help pigeons to get free from net. They all cried, “What should we do now? Not matter how hard we try, we are not able to get rid of this net.”

They looked at wise old pigeon and begged, “Please save us.”

Wise pigeon advised, “Stop pulling net in your own direction. Instead, try to fly up together and carry the net with you.”

All pigeon listened to him and started to flap their wings together and in no time started to fly away together with net still stuck to their feet.

Bird catcher saw this act of unity of pigeons in disbelief.

Then wise pigeon took entire flock, along with net to house of his friend – a mouse. He narrated entire incident and requested him to help cut the net and free all pigeons.

Wise pigeon said, “Unity had great strength. As long as you all stay united, no harm can come upon you. It’s your act of unity that saved your lives today.”

One thought on “Pigeons Trapped in Net – Unity is Strength”