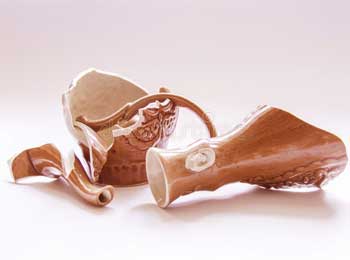 Once there used to be a king, who was considered eccentric by all because he used to give death penalty to anyone even on smallest mistakes.

In the palace of the King, 20 vases were decorated very beautifully and King loved to show this collection to his guests.

One day while cleaning, a vase fell and broke by servant. When King got to know about it, he ordered servant to be hanged.

An old man who was passing by that kingdom, heard about King’s nature. He came to know about this incident and about King’s vase collection. He decided to visit King’s palace. On meeting King, he told him, “I have a way to bring that vase back to it’s original state.”


King became happy and asked servants to take that old man to place where all other vase were kept. As soon as old man entered, he started hitting all other vase with his stick and broke them all.

On seeing this, King became very angry with this and said, “Why you did this? Why? You will be hanged for this..” King ordered his servant to arrest that old man.

To this old man replied sternly, “When a vase was broken by a servant, you gave him death sentence, that means every single time a vase broke, a person have to face death penalty.

In future 19 more people were likely to die because of these vases. So, today, as a human being i did my duty, by saving 19 lives. Now you can hang me. I feel no regret for doing this.”

Old man words opened the eyes of the King. The King realized his mistakes and freed servant from his punishment.

Learning:
When we stand firm on our point with Courage and Boldness, then we can put an end to Evil.

You May Also Like: Sage Question to Arrogant King – Deep Meaning

One thought on “Wise Old Man and Broken Vase Story”