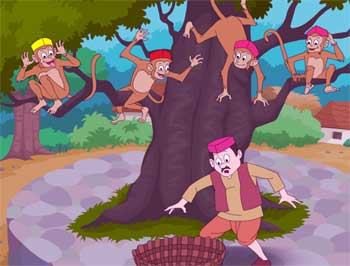 Once upon a time, there was cap seller who used to make caps and sell in nearby market.

One day, he planned to go another city to sell caps. So, he packed all his caps in a box and started his journey.

On his way to market of another city, he got tired. So, he decided to take some rest under a big banyan tree and slept off.

After a while, cap seller woke up and looked around. He saw that his cap box was empty. He was shocked to see his box empty.


He thought to himself, “It took me months to make those caps. I must find them.”

Quickly, he started to look here and there in search of his caps. To his surprise, he saw that there were lots of monkey playing on that banyan tree, under which he slept.

He saw that all monkey were wearing his caps and playing around.

Seller got angry and in his anger, cap seller took some stones from ground and threw it on monkey, so that he can get his caps back.

After a while, Cap seller realized that monkeys were imitating his actions. He thought for a while and got an idea.

He took his own cap from his head and threw it on the ground.

When monkey saw this action of cap seller, they immediately started imitating it and started throwing caps from their head to ground.

As soon as monkey threw caps, cap seller gathered all his caps and packed them in box and went away.

Moral:
Wisdom is Powerful than Strength.