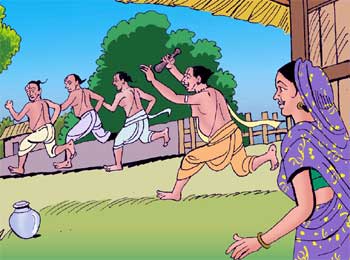 Once in a village lived a kind-hearted man Shyam with his wife Madhu. Although poor, he was generous man. Everyday he would bring guest home, for lunch.

Madhu tried to tell her husband that it was difficult to feed guests, when they were themselves are struggling to have two meals a day but Shyam wouldn’t listen and say, “God will be pleased, when guest is fed.”

Madhu realized that it would be impossible to make her husband understand this and decide to find a way to discourage guests from dropping in for lunch.


One morning, Shyam asked his wife to cook lunch for three guests and said, “You can expect them by noon.’

Madhu knew that there was not enough rice or dal to cook for three people but was not able to tell Shyam about it as one of his friends arrived early and was with him. A little while later, Shyam left with his friend and told his wife that he would be back by noon.

When Shyam left, Madhu had an idea.

She took out mortar and pestle used for pounding rice and then put some kumkum and haldi on pestle and placed it in hall.

At noon, guest came. Madhu invited them in with a smile.

Guests were surprised to see mortar and pestle being worshiped and kept in hall, so they asked reason for this.

Madhu told them, “My husband had taken a vow that he would hit his guests on their heads with pestle before serving them meals.

Hearing this guests turned pale, seeing this Madhu added, “Don’t worry. he won’t hit you hard. Just a gentle tap.” and then in lower voice she said, “Three times.”

Listening to this guest got up and ran out of house.

Just then Shyam came home and saw guest leaving. He asked his wife, “Did they have lunch?”

Madhu replied, “No, they left abruptly.”

Shyam asked, “Why what happened?”

Madhu replied, “They wanted this pestle but i told them that i con not part with it as my mother gave it to me.”

Shyam got upset with his wife and said, “We must give guests whatever they ask for. I will give it to them and bring them back.”

Shyam ran after guests carrying pestle, shouting, “Stop!! I want to give it to you.”

Thereafter, no guests came to Shyam’s place for lunch, much to the relief of his wife.

Moral:
With Wise Thinking one can get Solution to any Difficult situation.