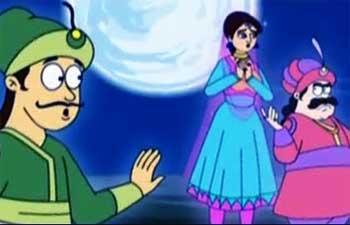 One day they approached the king’s barber with a plan. As the barber was extremely close to the king, they asked him to help them get rid of Birbal permanently. And of course, they promised him a huge sum of money in return. The wicked barber readily agreed.

The next time the king required his services, the barber started a conversation about the emperor’s father who he also used to serve. He sang praises of his fine, silky-smooth hair. And then as an afterthought he asked the king that as he was enjoying such great prosperity, had he made an attempt to do anything for the welfare of his ancestors?

The king was furious at such impertinent stupidity and told the barber that it was not possible to do anything because they were already dead. The barber mentioned that he knew of a magician who could come of help. The magician could send a person up to heaven to enquire about his father’s welfare. But of course this person would have to be chosen carefully; he would have to be intelligent enough to follow the magicians instructions as well as make on-the-spot decisions. He must be wise, intelligent and responsible. The barber then suggested the best person for the job – the wisest of all ministers, Birbal.

The king was very excited about hearing from his dead father and asked the barber to go ahead and make the arrangements immediately. He asked him what was needed to be done. The barber explained that they would take Birbal in a procession to the burial grounds and light a pyre. The magician would then chant some ‘mantras’ as Birbal would ascend to the heavens through the smoke. The chanting would help protect Birbal from the fire.


The king happily informed Birbal of this plan. Birbal said that he thought it a brilliant idea and wanted to know the brain behind it. When learning that it was the barber’s idea, he agreed to go to heaven on condition that he be given a large some of money for the long journey as well as one month’s time to settle his family so that they had no trouble while he was gone. The king agreed to both conditions.

In the duration of this month, he got a few trustworthy men to build a tunnel from the funeral grounds to his house. And on the day of the ascension, after the pyre had been lit, Birbal escaped through the concealed door of the tunnel. He disappeared in to his house where he hid for a few months while his hair and beard grew long and unruly.

In the meantime his enemies were rejoicing as they thought that they had seen the last of Birbal. Then one day after many, many months Birbal arrived at the palace with news of the king’s father. The king was extremely pleased to see him and ready with a barrage of questions. Birbal told the king that his father was in the best of spirits and had been provided with all the comforts except one.

The king wanted to know what was lacking because now he thought he had found a way to send things and people to heaven. Birbal answered that there were no barbers in heaven, which is why even he was forced to grow his own beard. He said that his father had asked for a good barber.

So the king decided to send his own barber to serve his father in heaven. He called both the barber and the magician to prepare to send him to heaven. The barber could say absolutely nothing in his own defense as he was caught in his own trap. And once the pyre was lit he died on the spot.

Nobody dared to conspire against Birbal again.

You May Also Like: Akbar’s Dream Meaning – Power of Words..! (Choose Your Words Wisely)