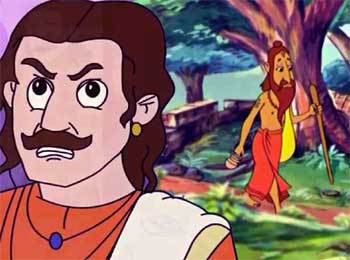 A saint used to go door to door for alms. One day he reached house a Seth (rich man) of village to beg for alms.

Seth bought some grains and gave them to saint as alms.

After giving alms, Seth said, “Maharaj.. I want to ask a question.”


Seth said, “I want to know why people fight?”

Listening to this, saint remained silent for sometime and then replied in loud voice, “I have come here to take alms, i have not come here to answer your silly questions..”

Hearing this, Seth for very angry and lost control of himself and started shouting at saint saying, “What’s this behavior? i just gave you alms and yet you are answering me like this..”

Seth said many things to saint in anger. Saint was standing there listening to him silently and didn’t said a word when Seth was shouting.

After sometime, when Seth calmed down, then Saint said to him, “Brother, as soon as i responded to you badly, you got angry. In anger you started shouting at me. If i had also become angry at that time then there would have been a big fight between us.

Anger is too cause of every quarrel and peace can end every dispute. If we don’t get angry then there will be no fight.”

Learning:
Essence of this story that, whether at home, family or workplace, we should remain calm. Even if someone is getting angry, we should answer calmly. As soon as we lose our calm and get angry, even small things can do big harm.

You May Also Like: Monk Meditation and Disturbance – Way to Control Anger Story