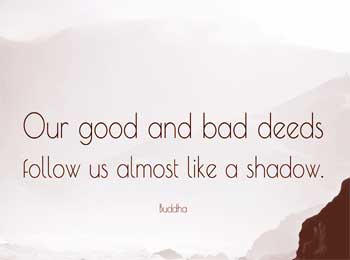 Once a rich man went to temple wearing new expensive shoes. While he was in front of temple he thought, “To go inside temple, i have to remove my new shoes and if i leave them here outside temple then they may get stolen… Then even after going inside i will be worried about shoes only, then it will not even feel like worshiping.”

While thinking, rich man saw a beggar sitting outside. He went to him and said, “Will you take care of my shoes till i return from temple?”

Rich man went inside, while worshiping he thought, “What kind of unbalanced world have you created.. Some have been given so much money that they buy expensive stuff while some have to beg to even feed themselves. How nice it would if everyone get to live same!”


While thinking all this, rich man decided in his mind that he will give rs100 to that beggar. After completing his prayer, rich man came out, he saw that there was neither beggar, nor his shoes.

Rich man felt cheated but still waited for sometime for beggar to return, thinking that he might have left for some work but even after long beggar didn’t return..

So, Rich man started walking toward his home barefoot. On his way, he saw a man selling shoes and slippers on pavement on side of road.

There rich man saw his shoes were kept there to sell. He went to that seller and asked about those shoes, at first that seller refused to tell.

But when rich man pressured him, he told, “A beggar came to me with those shoes and sold them to me for 100rs.”

Listening to that rich man thought something and smilingly continued walking barefoot towards his home.

Rich man realized that just then he got answer to his question, he asked God that Why there can never be uniformity in the society?

It because our deeds can never be same and… the day this happened, all disparities in the world and society will end..

God had written in fate of every human being that who will get what, when and where but its not written how one get it… It is determined by our actions.

As it was decided that day for beggar that he would get 100rs but how did he get that was decided by that beggar action..!”

You May Also Like: Why do We Suffer? Guru Disciple Story about Karma

Search Keywords: Why Doesn’t Everyone Get to Live Good Life? Rich Man Question to God, Rich Man Question and Instant Realization! Story about Our Karma and its Result, Deep Meaning Story for Adults, Story to Make You Think, Interesting Story with Deep Insight to Motivate One to Do Good Deeds