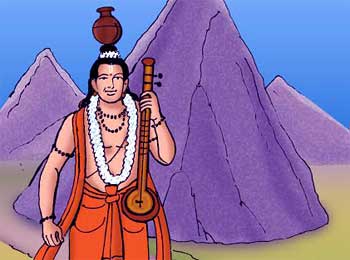 One day, When Narada met God Vishnu, he asked, “God, i have a question. Who is your greatest devotee in this world?”

God pointed toward a farmer ploughing his fields and said, “He is my greatest devotee.”

Narada was surprised to hear this. Farmer was a good fellow, working hard for a living but he took God name only once or twice a day where as Narada recited God’s name thousands of times a day.


God Vishnu could see that Narada was not convinced with answer given. So he gave Narada a pot filled with oil to its brim.

Then pointing toward a hill, God said, “Narada. I want you to go around that hill, carrying this pot of oil on your head but take care not to spill even a drop of oil from his pot.”

Narada placed the pot filled with oil on his head and started going around the hill. Narada took measured steps, walked slowly, carefully. He kept himself steady all the time so that pot on his head stayed still.

It took him whole day to complete one round. He returned to God Vishnu.

Giving back pot to God, Narada proudly said, “You can see that the pot is still filled with oil to its brim and not a drop has been spilled.”

God Vishnu smiled and said, “Yes, i can see that. Now tell me, how many times did you remembered to take my name?”

Narada cried out, “Oh God..! Not even once. My entire attention was on pot on my head. I forgot everything except the oil. I am sorry. I couldn’t remember you, i didn’t take your name even once.”

At this God said, “and that farmer remembers me amidst all his work, at least twice a day.”

Narada understood and agreed that farmer was a greater devotee of God Vishnu then him.

One thought on “Who is Your Greatest Devotee? Narada Question to God Vishnu”