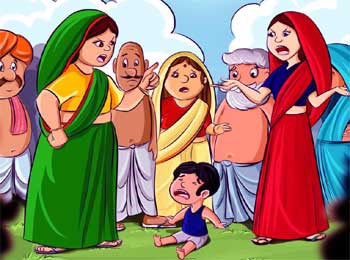 Once in a village, two women were fighting over a little child. Matter was taken to wise village chief.

First woman said, “He is my child. Please tell her to leave him alone.”

Another woman cried, “No, he is mine.”

Wise man said to first woman, “What do you have to say?”


She replied, “He is my child. I was bathing in river and had left my son on river bank. This woman lifted my child and ran away. I hurriedly dressed and ran after her.”

Village chief asked other woman to explain her side.

She said, “She is a liar. I was the one bathing in river and he is my only child. She came there and picked up my child and ran. Luckily i was able to catch her.”

Villagers who were watching this and didn’t know whom to believe.

Wise man got up and using a twig, he drew a line on ground then he asked both of them to stand on either side of line each and placed child in middle.

The he said, “Now, listen carefully. Both of you need to pull the child to your side. Child belongs to whoever drags child over to her side.”

Both woman were holding hands of child, first woman started to pull child hard to get him to her side. As child cried in pain, other woman, let go that child hand saying, “I can’t do this. Let her have child.”

First woman took the child and shouted in triumph, “He is mine.” as other woman broke down in tears.

The turning to villagers he asked, “Who do you think loves child more? One who pulled the child to her side or one who let the child go?”

Villagers couldn’t answer. Then village chief took away child from first woman and gave child to other saying, “Only a mother can have tender heart for her child. She couldn’t bear pain child was feeling and that’s why she let his hand go.”

Real mother hugged her child and thanked village chief. Child lifter was given punishment for her wrong doing.