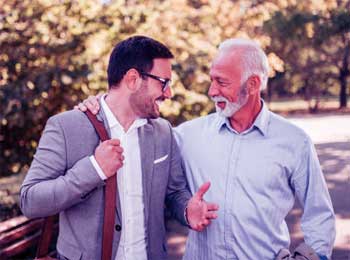 Once in a city, lived a poor tailor in a small house with his only son. He had a dream that his son should study well and get a good job.

So, he decided to get his son best education, no matter what their current situation is. Father worked day and night to earn money for his son’s education. His son studied diligently.

After years, Father dream came true and his son was selected as head of big company in the city.

One day, father decided to visit his son office. When father came to see his son in office, he saw that his son was sitting in his luxurious chair, in his big and luxurious office.


As soon as son saw his father, he was very happy and stood up from his chair and welcomed him.

Father smiled and made his son sit on chair and stood behind his son, placing his hands on son shoulder and said, “Son, what do you think? Who would be feeling like the most powerful man, right now?”

Before father could speak any further, son said, “Father, i feel like i am the most powerful person.”

Father thought that son would call him most powerful but was very disappointed by son’s answer, he replied, “Right son.” and was about to leave office.

But before leaving, father turned back and asked same question to his son, “Do you still think that you are the most powerful person?’

Son replied, “No, father, if anyone is most powerful person, It Is You.”

“But just now you said, that you feel like, you are the most powerful”, father asked.

Hearing this, father for tears in his eyes and hugged his son.

Learning:
It is the Blessings of our Parents that can make us the Most Powerful person of this world.

You May Also Like: Value of Money Earned – Father Son Story