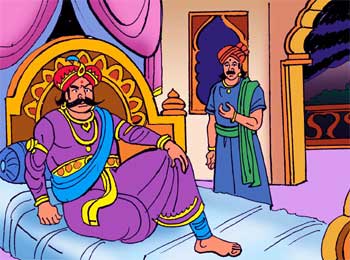 Long ago, in a kingdom lived a man who was famous for being ill-omened (unlucky). At last people complained to King about that man.

King didn’t believed this belief of people and decided to investigate himself. So, he sent his soldiers to bring that man to palace and made arrangement for him to stay.

Next morning, King himself came to see his face and meet him. Incidentally. King could not eat that day due to busyness.

King came to the conclusion that man’s face was really unlucky. He ordered that person to be given death sentence.


When minister heard this order of King, went to king and asked, “Why are you giving death penalty to this innocent man?”

King said, “This person is really ill-omened. Today, first thing i did in morning was to see his face and after that i didn’t get to eat food for whole day.”

Hearing this, minister said, “Sorry my lord, this person also saw your face first thing in morning. You didn’t get food.

But after seeing you first thing in morning, he got death penalty. Now, you decide for yourself who is more unlucky.”

King was ashamed at his order

Seeing King in despair, minister said, “My lord, no person has a unlucky face. It is God’s gift. Unlucky/ill-omened is in the way we look or think. Please, kindly release this person.”

King understood and at that moment he set that person free and rewarded minister for giving right advice at right time.

Those who criticize others should also remember this incident.

You May Also Like: Old Man’s Beautiful Horse and Judgements (Must Read)

Search Keywords: Who is More ill-omened – Minister Question to King, Deep Meaning Moral Story about Judging Others, Different Way of Thinking Interesting Story to Read, Story about Criticizing Others