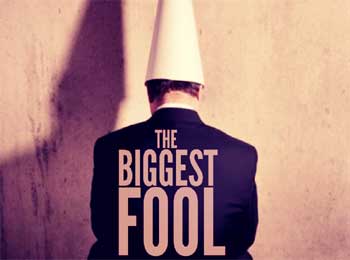 Once in a village, lived a devotee named Gyanchand who was always engrossed in devotion of God.

People were surprised by his such behavior and thought of him as mad man.

People will criticize him saying – He is such a fool. He opens his shop only for a while where as he could have earned so much if he would keep his shop for longer. And not only that he would spend all his money in service of saints, poor and doing charity.


There was a Rich man in village who was called nagar Seth.

One day, Seth went to meet Gyanchand and giving a cap to him, he said, “This cap is for biggest fool. So, i want to give this cap to you because i can’t find a fool bigger than you. If you see someone who is bigger fool than you, then you can give this to him to wear.”

Gyanchand didn’t said anything and kept that cap.

After some years, Gyanchand heard that Seth got ill. So he went to meet him and inquired about his health condition.

Seth said, “Brother, my end is near, i will be leaving.”

Gyanchand asked, “Have you sent someone there before you to make all preparations for you? Will your wife, son, money, car, bungalow etc go with you?”

Hearing these words, Gyanchand got up and went back to his home and returned to Seth after sometime.

Seth was surprised to see all this and asked, “What happened? Why did you leave?”

Gyanchand gave that cap to Seth and said, “I went to get this cap, one you gave me.”

Seth asked, “Why are you giving it to me?”

Gyanchand replied, “When you gave me this cap you said that i should give this to someone whom i find more foolish then me. Today i found that man.

You are more foolish than me.

When you knew that the whole property, house, shop worldliness will not go with you, even then you were engaged in this greed throughout your life and even after the requirements were fulfilled, you still were interested in earning more.

Engaged in fulfilling physical desires and did not do good deeds, did not serve the needy, did not worship God, did not do charity, did not do religious work, did not propagate religion, did not prepare anything for going to the other world. Now you yourself understand who is the bigger fool.”

You May Also Like: Material Life vs Spiritual Life!!

Search Keywords: Who is Biggest Fool? Seth and Devotee Story, Story for Spiritual Enlightenment, Real Truth of Life Story with Deep Meaning, Story to Motivate To Live Life for Spiritual Advancement, Stories for Adults to Learn about True Meaning of Life