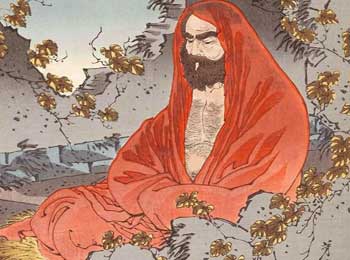 When Bodhidharma went to China, then Chinese emperor came to know about him. He went to see him.

Emperor said, “My mind is very uneasy, very disturbed. You are a great Sage. Please tell me what i should do to put my mind at peace.”

Bodhidharma said, “You don’ have to do anything, just bring your mind to me.”

Emperor couldn’t understand said asked, “What do you mean?”


Bodhidharma said, “Come in morning, at 4o’clock when no one else is around and don’t forget to bring your mind with you.”

Emperor went back. Whole night he was thinking about what Bodhidharma said to him and couldn’t sleep. At times, he thought, “I should not go, he seemed like a mad man. What does even he meant by – don’t forget to bring your mind..”

Still at 4o’clock in morning, emperor got up thinking, “I don’t understand what he meant but still i must go and see what can happen.”

So emperor reached. Bodhidharma was sitting and seeing emperor, he asked, “So you have come. Where is your mind? Have you bought it or not?”

Emperor replied, “You talk nonsense. When i am here, then my mind is also here. It is not something that i can leave behind or forget to bring. My mind is with in me.”

Emperor closed his eyes and tried and tried, looked and looked… more he looked more he realized that there is no mind, it is just an activity. It is not something that he could pin point at. If it is not something, so nothing can be done about it.

Moment he realized that is not something, then absurdity of his quest became exposed to himself. He understood that if mind is just an activity then don’t do it.

He opened his eyes and bowed down to Bodhidharma and said, “There is no mind to be found.”

Bodhidharma said, “Then i have put it at peace.”

You May Also Like: Anger or Love Your Choice – Zen Master Story