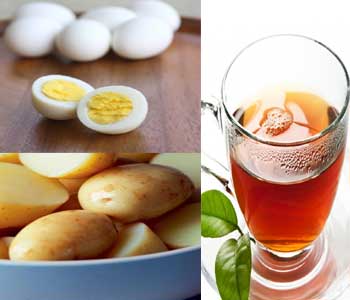 Sona was a young girl. She had a major problem that she got annoyed with everything. She felt bad about everything and just always carried a negative thinking. She used to get angry as well as got frightened of everything. She developed all these negative aspects suddenly. One day she felt she was so miserable and requested help from her dad.

She told him that if she was able to manage and solve a problem, another one followed quickly and it got repeated. Her father consoled her and took her to the kitchen.
He asked Sona to take a potato, an egg and two spoonfuls of tea leaves. Sona was surprised, and asked her father ‘do you want me to cook?’

Her father denied. He then took three vessels and poured one cup of water in each vessel. Each vessel was placed on the stove. Once the water started to boil, he dropped potato in a vessel, egg in the second one and tea leaves in the third one.

Sona was totally annoyed and asked him, why would her father do those stupid things? He asked her to wait for a few more minutes with patience.
The impatient daughter managed to wait for around 15 minutes.
The Father removed the potato from the pot and placed in a plate and did the same with eggs. He filtered the tea using a cup.


Now, he placed the two plates, one with the potato and the other with the egg, and the cup of tea in front of Sona.
He asked Sona, ‘What do you see?’

‘No, you are wrong,’ said the father.
‘Look at it closely and answer me.’

‘Now touch it and reply me.’ The potato was cooked and was so soft, the egg was boiled hard and the tea carried the nice aroma.
Sona couldn’t find the correct answer. Her father replied,

‘The potato was so hard and strong before they were boiled; now they turned soft and smooth. Also, the egg was too delicate but after boiling it became too hard. Sip the tea, it is delicious!’

Sona asked, ‘What does it mean father? I don’t understand!’

‘Each object responded differently to water. That is how you have to be?

Each object was put under the same kind of circumstance, faced similar adversity, but reacted differently. The potato, when put in boiling water, became very weak. The crumbled egg became very hard, when we put in boiling water. And the tea leaves are unique. It changed the water itself, giving it unique flavor and aroma! It gave something new.’

Sona understood that we could create something new and unique even when we experienced adversity.

So, what are you? A potato or an egg or a tea leaf?

More Inspirational Stories: Story of Enrico Caruso (From Rejection to Being Successful Singer)

Search Keywords: Short Motivational Stories for Life, Potato Egg and Tea Short Story – What You Want to be In Life Inspiring Story for Kids and Students