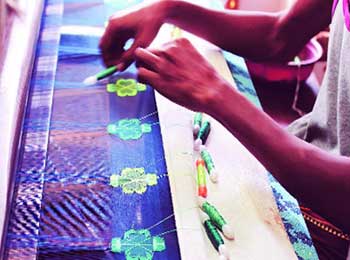 Once upon a time, in a city lived a weaver. One day while weaving, wooden frame of his loom broke.

So, he took axe and went to near by forest to bring wood for loom. On his way, he found a big tree and decided to cut it.

As weaver raised his axe, a voice came from tree that said, “This tree is my home, you must spare it.”

Weaver replied, “But if i don;t get the required wood, then i won’t be able to do my work and my family will starve to death.”


So, he requested spirit to go somewhere else so that he can cut tree.

Voice said, “Ok. If you don’t cut the tree then i will give you a boon of your choice.”

Weaver replied, “In that case, can i go home and ask my wife and friends for suggestions and return tomorrow?”

Weaver returned to his city and on his way back he met his friend barber and explained him all that happened and asked him for his suggestions.

Barber said, “My dear friend, ask for a kingdom where you could be King and i would be your prime minister. This way both of us can enjoy life here after.”

Weaver said, “True but let me ask my wife too.”

Saying this weaver quickly went to his home and narrated whole story and told her about his friends suggestion.

His wife said, “A king’s life is full of hardships. He is always worried about friendships, wars, servants and other things. He never get a minute rest. You should not wish for kingdom or King’s life.”

Weaver replied, “You are right but than what should i ask for?”

Wife said, “Every day you are able to weave a single piece of cloth which is barely enough to meet our daily needs. What if you can double it, then we can live a comfortable life.”

Weaver asked, “How it that going to happen?”

Wife replied, “You should ask for another pair of arm and another head, so that you can work on two piece of cloths at once. One in front of you and one behind you.

With money earned from first peice we can live like always and with second piece money we can fulfill our special needs and live comfortably.”

After listening to wife, weaver said, “You are faithful wife and you have spoken well. I will do what you suggested.”

Next day, weaver returned to that tree and said. “I have decided on my request. I request you to give me a pair hands and an extra head.”

As soon as he said this, he became two headed and four armed person. He became very happy and begin to walk toward his home.

People on way saw him and considered him as kind of demon. They got scared and hammered him with stones and sticks. Poor weaver died on spot.

Moral:
One who had no Wits of his Own, will Perish.