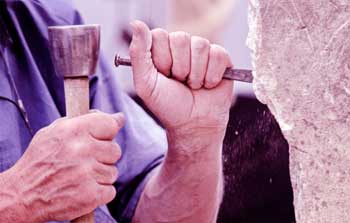 Once there was a stone cutter who was always dis satisfied with himself and his life. One day he was passing  by a rich merchant house and when he saw important visitors there he thought to himself, “How powerful that merchant is!!” He got envious and in thought wished that if he could be like merchant.

To his surprise just in that moment he became merchant. Now he was enjoying luxury and power that he imagined. He was envied by those who were less wealthy than him.

Soon one day he saw a official passing by. He saw that he was accompanied by attendants and soldiers were beating gongs and everyone around him however wealthy he/she was had to bow before him when he passes by. Seeing this he thought to himself, “How powerful this person is. i wish i could be a high official.”

In that moment he became high official and now he was enjoying this power. He was served by attendant and solider accompanied him everywhere. People around him now feared and hated him.


One day it was too hot and he felt very uncomfortable sitting in his luxurious chair. At that time he looked up at the sun and thought to himself, “It shines proudly in the sky unaffected by any other presence. I wish that if i could be that sun.”

Now he became sun shining fiercely down on everyone, hated by farmers and laborers. One day a huge black cloud moved between him and the earth and his light could no longer reach earth. This time he thought to himself, “How powerful that cloud is! I wish if i could be that cloud.”

Now he became cloud. He rained flooding fields and villages and shouted at by everyone But soon he realized that he was pushed by some great force and realized it was wind. This made him think that, “How powerful wind is! I wish i could be that wind.”

Suddenly he became wind blowing off roofs of houses, uprooting tress. Everyone below hated him. After a while he reached something which wouldn’t allowed him to move further which made him think, “How powerful this rock is! I wish if i could be that rock.”

In a blink he became that huge towering rock feeling most powerful thing on earth. Soon on day he heard sound if hammering pounding chisel into his hard surface and find himself being changes and he thought to himself, “What can be more powerful than me, rock?”

He looked down to see and saw far below was a figure looking like stone cutter..

Moral:
Being Satisfied with What we are and What we have is the key to Happiness. Wanting to be Most Powerful and Feeling of being Unsatisfied have no End.

2 thoughts on “Want to be Most Powerful!!”