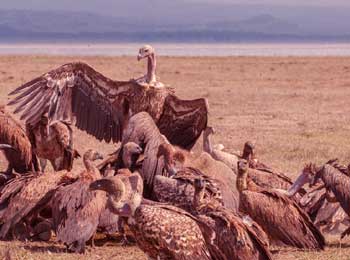 Once a herd of vultures reached an island which was situated in middle of sea. There were lots of fishes and sea creatures, vultures had no shortage of food and drinks there. Best part was that there were no wild animals who  would attack them.

Vultures were very happy there as they never had lived such comfortable life before.

Most of vultures in herd were young and started thinking that they will live rest of their life there because they could not find such comfortable life anywhere else.

In midst of all of them, there was an old vulture. When he saw those young vultures and learned about their thoughts, he got worried.


One day, he called all young vulture and expressed his concern saying, “It has been a long time, we are living on this island. I think we should go back to same forest from which we came. Here we are living life without challenge and in such conditions we will never be able to prepare for trouble.”

Young vultures didn’t paid attention to old vultures thoughts and felt that it was effect of his old age, that’s why he is saying such stupid things. Young vultures refused to leave life of comfort.

Old vulture tried to explain, “You all are not paying attention, you have forgotten to fly because you have become accustomed to comfort. At such times if you get in some problem, what would you do? Come with me.”

But no one listened to him. Old vulture left alone. A few months passed. One day, old vulture thought of checking on vultures living on island.

After reaching island, he saw that view had changed. Wherever he looked, there were dead bodies of vultures lying. Among them many were lying bloodied and injured.

Old vulture was shocked to see this and asked a wounded vulture, “What had happened?”

Injured vulture said, “After you left, we were living life of great fun on this island. But one day a ship came here and cheetahs were released from that ship on this island.

Initially those cheetahs did nothing to us but after few days when they realized that we had forgotten to fly and our claws have become so weak that neither we can attack nor defend ourselves.

They started attacking us and eating us. We are in this condition because of them. Perhaps we have got this result for not listening to you.”

Learning:
Often after going to the comfort zone, it is difficult to come out of it. In such a situation, it is not easy to face challenges when they come. Therefore, always keep challenging yourself and be ready for trouble.

You May Also Like: Three Brothers and Scholar Story – Way to Progress