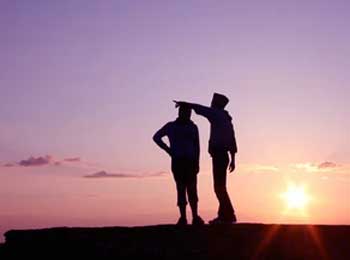 Once upon a time, a very virtuous person along with his family went for a pilgrimage. After going several miles, whole family started feeling thirsty. Water that man was carrying with him had run out.

It was month of June and there was no water to be seen anywhere and his child started getting dehydrated.

Seeing no hope, he prayed to God, “God, now only you can do something.”

Just then he saw that at a distance a Sage doing meditation. He went to that Sage and told him about his problem.


Sage told him, “A small river flows in the north direction. You can go there and take water from there to quench thirst of your family.”

Man was very happy to hear words of Sage and thanked him.

Due to critical condition of his wife and children, he asked Sage, “If my family could stay here while i go to get water?”

Sage agreed. Man reached river and collected water for himself and his family.

When he was returning with water from river, he met five people on the way who were very thirsty. That virtuous man couldn’t see them suffering because of thirst and gave all his water to those people.

He went back to river and collected water again. When he was bringing water again, he met some other people who were thirsty and looking for water. Again that virtuous man then gave all his water to them.

Same incident was happening again and again. After a long time, when he did not come, Sage went to look for him and saw what was happening.

Sage went to man and said, “O virtuous soul, you repeatedly fill your bucket with water and bring it from the river and empty it for the thirsty. But what benefit did you get from this?”

Man replied, “What did i get? What i did not get? I never thought about it. I just wanted to help those in need.”

Sage said, “What is the use of such help when your own children and family does not survive. You could have helped them like i did.”

Sage replied, “I told you the way of river instead of giving you water from the river. You should have told all those thirsty the way to river.

So that you and your family thirst could also be quenched alongside other people. And for this you didn’t need to empty you bucket every time.”

Virtuous man understood everything that instead of emptying his virtues and giving it to others, he could tell them the way or method to earn virtues themselves.

Learning:
If you want to Think to do Good for someone, then Show him the path.

You May Also Like: Three Rich Man and Their Kindness

Search Keywords: Virtuous Man and Sage Story – Ways to Help Others, Deep Meaning Story about Helping Others, Interesting Story with Moral Lesson for Adults, Doing Good for Others Short Must Read Story