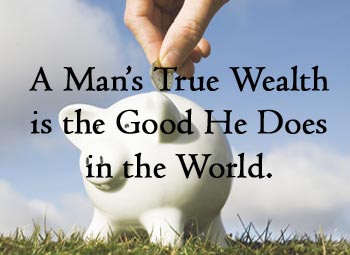 Once in a town lived a very greedy rich man. Rich man ordered to build a big safe and he wanted to fill it will gold and jewels. So, one day he hired a mathematician to find the best way for him to make the greatest profit in everything he did.

Mathematician studied for months before he found the solution.

One night, Mathematician had a big smile on his face. Next day, he went to rich man house and said, “I found it..! My calculations are perfect..!”

Rich man didn’t had time to listen to him as he had to leave for long journey. So he said to mathematician,”I promise i will pay you double wages when i come back but only if you take charge of my business and put new formula into practice.”


Mathematician was very excited because of his new formula, he delightedly accepted the proposal.

Months later when rich man returned, he found that all his possessions had gone. He got furious and went to mathematician to ask for explanation. Mathematician calmly told him that he had given away everything to people in need. Rich man couldn’t believe it and was getting mad.

Mathematician explained rich man his formula, “I studied for months but every way which i found was always limited as there’s limit to how much one man can do by himself. Then I understood the key was that many people could help us to achieve the aim. So the conclusion was that helping others was the best way to get more and more people to benefit us.”

Rich man was disappointed and furious over mathematicians act and went out. While he was walking away, several neighbors came to him looking worried about him. All of them were those who were helped by Rich man’s fortune.

They felt grateful to him and offered him to be guest of their houses. Over next few days, Wherever he went he was received with great honor and everyone was willing to help him in whatever way they could.

Now, rich man can see the results of what mathematician had calculate. He realized that helping others with some now has given him much, much more.

In this way, he managed to quickly set up flourishing businesses, but this time he followed the brilliant mathematician’s advice. Now he no longer kept his money in safe, instead he shared out his fortune among people, whose hearts had converted into safest and grateful.

Moral:
Helping Others and Sharing with Others give the Ultimate Happiness and Riches.

One thought on “Value of Sharing..!!”