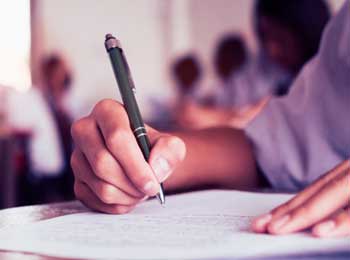 “Son! please go after you eat some food, you haven’t eaten anything since two days”,a helpless mother said to her son.

“Look mother! I had asked for a bike when vacation starts and papa promised that he will buy me one after my exams end. Today is my last exam, tell sister that as soon as come out of examination hall, be there with money.

I will buy my friend’s old bike today only and if she doesn’t come with money, i won’t come back home.” replied her son angrily.

(In a poor house, stubbornness of son and helplessness of mother were clashing face to face.)


“Son! your father was about to buy a bike for you but accident happened last month…”, said mother

But before his mother could say anything else, son said, “I don’t know anything. I want a bike!!!”

(Saying this son left his mother in midst of poverty and helplessness and left house.)

It was final year exam for students of high school. In school, a teacher used to organize a unique examination for all the student. No student would miss that exam. After main exam was time was over, all students were called over for additional exam.

This year subject topic was MY ROLE IN FAMILY

Mohan came and sat in examination hall. But only thing he was thinking about was bike..

Exams sheet were distributed to everyone. Exam paper had 10 questions and one hour was given to answer.

Q1. In your house, how many hours does your father, mother, sister, brother and you work? Answer in detail.

Ans. Papa drives auto rikshaw and he leaves at six in morning with in his auto and comes back at nine in night. So he works about 15 hours.

Mom gets up at 4 in morning and prepares everyone lunch box, then does all the household chores. She does some sewing work in afternoon to earn some money and sleeps after everyone is asleep in house. So she works about 16 hours a day.

My elder sister goes to collage in morning and then do a part time job from 4 to 8 and at night helps mom with her work. So about 12-13 hours.

I wake up at 6 in morning and go to school. In afternoon i return home and have food. In evening i go to walk with friends and i study till 11 in night. So about 10 hours.

(This convinced Mohan that he had the lowest working time among all in his house.)

Q2. What is monthly total income of your household?

Ans. Papa’s income is around ten thousand rupees. Adding mother and sister income it, total income is about fifteen thousand.

Q3. Mobile recharge plan, name three of your favorite shows, address of cinema hall in city and name of movie currently playing there.

Because Mohan knew all this, he was able to answer it in 2 minutes.

Q4. What is the current cost of 1kg potato and 1kg onion? What is cost of 1kg wheat, rice and oil? From where do you get your flour, write it’s address.

(He realized that he didn’t have the slightest knowledge about things of our daily necessities. Whenever his mother used to ask him to bring anything, he would refuse. He had always been shying away from taking any responsibility for household work.)

Q5. Do you ever quarrel or get angry about food in your house?

Ans. Yes, i do not like any vegetables other than potato. If mom cooks any other vegetable then i don’t eat food and argument happen.

(As soon as he wrote this, Mohan remembered that, eating potatoes causes gas problem to his mother and her stomach hurts. She always put a big spoon full of carom seeds in her vegetable.

One day, he accidentally ate vegetable which his mother had kept for herself but as soon as he put that vegetable in mouth, he spit it out because it didn’t taste good.

And when he asked his mother about it, his sister said that their house income is not so good that they can not cook two vegetables at a time. What could mother do, because of his stubbornness?)

Q6. Write about last demand you made in your house.

Ans. I asked for a bike before vacation starts and my father promised to give it to me on completion of my exams but 2 days ago when i asked, papa didn’t answer.

Q7. What do you do with your pocket money you get from your parents? How does your sibling spend it?

Ans. Papa gives me 200 rupees per month. I spend it on things i want or spend it with friends. Papa also give 200 rupees to my sister even when she earn herself. She saves her money. She is a miser just like my papa.

Q8. Do you understand your own role is your family?

(Mohan found it difficult to answer but still he wrote)

Ans. Staying connected with family, treating each other nicely and be helpful, fulfilling my responsibility.

(As soon as Mohan wrote this, a voice came from inside – Are you fulfilling your role properly? and just then Mohan realized the true answer which was – No not at all)

Q9. Are your parents happy with your result? Do they insist on getting good result or scold you?

(Mohan’s eyes were filled with tears, as he had understood his role toward his family)

Ans. I have never been able to give satisfactory results to my parents till date. I broke my promise of getting good result many times but they never scolded me harshly. Sometimes, they would scold me slightly. Even after not getting expected result, i get same love and affection.

Q10. How will you help your family in vacation to play an effective role in family life?

Before Mohan’s pen moved in response, tears started flowing from his eyes, and before writing the answer, the pen stopped.. Keeping his face down, he started crying. He picked up the pen again, even then he could not write anything.

He submitted the paper leaving the tenth question unanswered.

When he came out of classroom, he saw his sister waiting for him at school gate. He ran toward her.

As soon as he stood before her, she handed him money saying, “Brother! take these eight thousand rupees. Mother said that you wouldn’t come home if you don’t get your bike today.”

Mohan asked, “From where did you get this money?”

Sister replied, “I asked my employer for advance. Mom also borrowed some money from where she works and i took out all the money i had saved. This way we were able to arrange money for your bike.”

Mohan eyes were fixed on money.

Saying this, his sister left for house.

Mohan was looking at bike and after a while he said, “Friend, you can give your bike to that person who can give 12 thousand rupees. I was not able to arrange money for it. I can not buy it.”

After this Mohan went straight to Sir’s cabin.

Seeing him Sir asked, “How was the exam?”

Mohan replied with teared eyes, “Sir, it was not just an exam but a guideline for my life, I have left a question unanswered. I will not write it but do it by fulfilling responsibility of my life.”

Saying this, he touched his Sir feet for blessing and left.

As soon as he reached home, where his family was eagerly for him to return, his mother asked, “Where is your bike?”

Mohan handed over money to his sister and said, “I don’t want bike anymore.”

He went to his father and said, “Papa, from today on i will drive your Auto rikshaw and help you with your work. You rest and let your injury heal.”

Then he looked at his mother and said, “Why don’t you cook vegetable of your choice. We will all eat that today.”

Seeing change in Mohan’s nature, his mother hugged him and said, “Today i will make your favorite vegetable.”

Mohan replied, “No. Mother now i understand my role in family. I will eat whatever you make from now on. I will help you with household work too.”

Just then his sir entered his home and said, “Mohan, when you left. I read your paper and came to your house. I was listening to change that happened in you. I am happy that my unique exam was a success.”

Mohan thanked his sir and took his blessing before leaving for work.

You May Also Like: Inspiring Interview – Appreciating Your Parents Hard Work