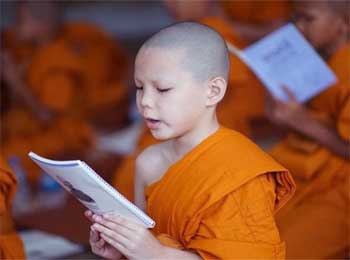 Once there used to a monastery where rules were very strict. One rule was not to speak even a word. All monks in monastery adhered to this rule. Every one who joined monastery had taken up strict vow of silence.

Though there was a rule to not speak a word, once monk completed one years of vow of silence, he was given a chance to speak but even at that time monk was allowed to speak only two words.

In monastery a young man joined.

When his first year ended, head monk called him and said, “Your first years of silence is complete. Now you are allowed to speak but remember that you can speak only two words.”


Young monk thought for while and finally spoke, “Bed, Hard.”

Young man continued to live in monastery. Another year passed.

Again after completion of next years, head monk again called that young monk and said, “So, what do you have to say this time?”

Young man still continued to live in that monastery. Again another year passed.

Again head monk asked, “What are your two words this time?”

Head monk thought and said, “Well, i can see why!”

Head Monk of the monastery said, “Good, anyway all you have been doing these three years was nothing but complaining!”

Moral:
If you Complain, you will never be able to see Finish line and will Quit even before you get there. Therefore, If one want to Accomplish anything then one have to Stop Complaining and start Working toward Self improvement.

The Feeling of deep gratitude can arise only when we become Aware of what existence is giving to us. Our attitude towards life is our own Choice. Whether we choose Gratitude or Complaint, that is exactly what life will Reflect back to us.

You May Also Like: Two Monk and a Woman Story