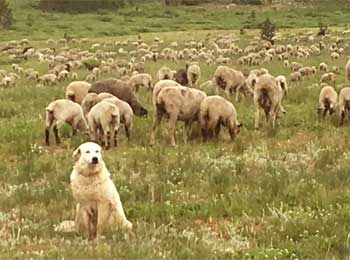 Once King asked his minister, “Rate of birth of dog is far ahead of rate of birth of sheep still flocks of sheep are seen and dogs are seen only in some places. What could be reason for this?”

Minister said, “Give me one day time. I will give you answer tomorrow.”

In morning minister came with the King.

He opened first room. King was surprised to se that all dogs had lost their lives and basket of bread was still there as it is. No dog could eat a single piece of bread.

Next, minister accompanied King to second room. After opening this room, King saw that all sheep were sleeping very comfortably with their head lying on other and their fodder basket was completely empty.

After showing this minister said to King, “Dogs couldn’t eat a single bread and died fighting among themselves. On other hand, sheep ate fodder with each other and fell asleep comfortably.

This is the reason why there is an increase in lineage of sheep where as dogs can’t stand each other and fight each other.

Community in which their is so much hatred and they fight among themselves, how can it grow well?”

Learning:
Only by Mutual Love and Brotherhood, the Lineage grows.