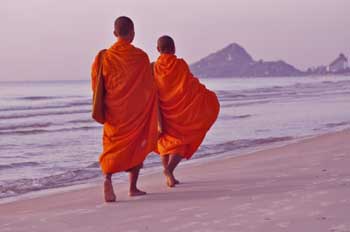 Once two monks were traveling. They were going to another monastery. Due to their rules they were not even allowed to look at women. After walking for long they reached a river which they had to cross. The flow of river was so flooded that they couldn’t get across it without getting wet.

Their they saw a woman without who was standing their wanting to cross the river but she was not able to cross it by herself.

One of the monk saw that and without thinking much he carried her on her shoulders and took her to other side of the river. After reaching other side of river monk settle her down and woman went on her ways.


Both monk continued their walk in silence after reaching other side of the river. Other monk was really upset with the fact that his friend helped woman to cross river by carrying her. As per their rules, they were not allowed to even look at the women and yet he carried her across the river.

After walking for while other monk couldn’t stand this thought anymore so he asked his friend, “We are not allowed to even look at woman but yet you carried her across the river.”

Monk smiled and replied, “I left that woman when we crossed the river, are you still carrying her??” 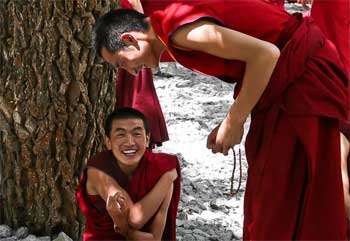 Once there was monk in china who was very serious Dharma practitioner. One day he came across something which he couldn’t understand so he went to his master and asked. After hearing his question his master laughed and kept on laughing even when master walked away he was still laughing.

Young monk got very disturbed by the reaction of his master. For next few days he couldn’t sleep or eat. At last he went back to master and told him how disturbed he was because of his laugh.

When master heard this, He said to him, “You are worse than a Clown.”

Listening to this shocked the young monk and he asked his master, “Sir why you say such a thing, how can i be worse than a clown?”

His master replied, “A clown enjoys seeing people laugh but you! You feel disturbed because another person laughed. Tell me, are you not worse than a clown?”

Hearing this young monk began to laugh and felt enlightened.