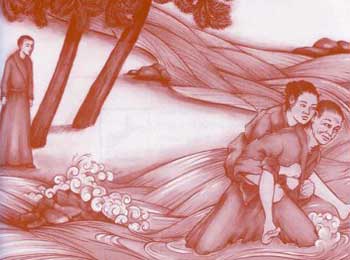 Once upon a time, two monks were traveling together. One their way to home, they came to bank of river and found that bridge was damaged.

They had to wade (walk through) across the river. A pretty lady was standing on bank of river, She was also stuck there because of damaged bridge. She had to cross river too but couldn’t.

Elder monk inquired her if she needed help to cross river. Lady responded that she do need help.

Seeing that lady was in trouble, Elder monk offered to carry her across river on his back. Lady accepted.


Younger monk was shocked by Elder monk’s offer and thought, “How can he carry a lady on his back, when we are supposed to avoid all intimacy with females?”

But he kept quiet.

Elder monk carried lady across river and younger monk followed but he was unhappy by this act of elder monk.

When they crossed river, Elder monk let the lady down and they parted their ways. Monks continued on their way.

All along the way for several miles, younger monk didn’t said anything but was making up all kind of accusations about Elder monk in his head.

As time passed, Younger monk got more and more angry about this but still kept quiet.

Finally, at a rest point, many hours later when younger monk couldn’t stand it any further, he burst our at Elder monk, “How can you claim yourself a devout monk, when you seize first opportunity to touch a female. All your teachings to me, were just big hypocrisy. This act of your make you a big hypocrite.”

The Elder monk looked surprised and said, “I had put down that lady at the river bank many hours ago, How come you are still carrying her along?”

Learning:
This Zen story has a Beautiful message about Living in the Present moment. How often do we Carry around Past hurts, Holding onto Resentments, When the only Person we are really Hurting is ourselves.

can Choose to Let go of what doesn’t Serve us anymore and Concentrate on the Present Moment.

Search Keywords: Two Monk and a Woman at River Crossing Story, Zen Story about Learning to Focus on Present