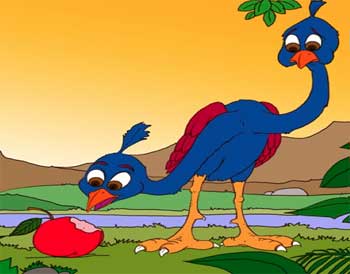 Once upon a time, lived a strange bird near a big banyan tree beside river. Bird was strange because it had two heads but only one stomach.

Once, while bird was wandering around and flying high in sky. Just then first head saw something shiny on river bed. Bird came down quickly and picked it up. It was a fruit and bird hadn’t seen such wonderful fruit until now.

First head started eating it, it was most delicious food it can have.

Second head saw this and demanded to have some portion of that fruit. It said, “How could you eat that alone? It’s not good. I am your twin head. Share it with me also. I also want to it and taste this delicious fruit.”


First head replied, “Be quiet! I know we are twin head but don’t you know that we have same stomach. Whichever head eats, fruit will go to same stomach. So it’s not important which head eats it. So stop complaining. I am one who found this fruit so i have right to eat it.”

Second head felt bad hearing this but didn’t say anything at that time. It became anxious because of greedy behavior shown by first head.

Some days later, while bird was flying in sky enjoying cool breeze. Second head suddenly saw something and flew down. It was a tree loaded with fruits.

Second head went ahead and plucked one fruit from tree and was about to eat it.

Just then first head shouted, “Stop..! You must not eat this fruit. Don’t you know that this tree bears only poisonous fruits? If you eat this then both of us will die at once.”

Second head was angry with him because of previous incident and pretend as if it was not listening and kept on gazing at fruit.

First head pleaded, “Please think again. We share common stomach, if you eat this then it will kill both of us. Why are you behaving so cruelly? Don’t eat it.”

Second head shouted, “Shut up. Look who is talking about cruel behavior now? As i have seen and plucked this fruit, i have every right to eat it. Now, nothing could change my mind.”

First head kept on begging and crying but other head didn’t listen to him and just wanted to take revenge. So, he ate that fruit and as it was to happen, both of them died on spot.

Moral:
This story here tells us that an Individual Ego in a family would Harm Each of the Members. Quarreling with our Own people affects the Whole family badly. So, for Staying united, we should Avoid having a State of two Different minds.