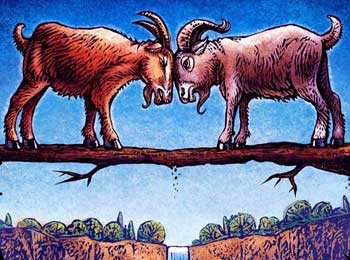 Once in a forest which was divided by a river flowing through it. here was a bridge which connected two sides of forest. Animals would pass over it to go to other side.

Bridge was so narrow that at a time only one animal or person could walk over it.

One day, a goat was crossing that bridge built over river. When goat was at half way on the bridge, she saw another goat was coming from opposite side of bridge.

First goat asked second got to go back and give her place to cross bridge first but second goat refused and asked her to do same.


Both goats were adamant and were not ready yo go back and give place to another to cross bridge.

They quarreled for some time and then started to fight with each other using their horns. Both tried to push other with it’s horn.

At last, because of fight they both fell from the bridge and drowned into the river.

Later that day, one more goat was crossing same bridge, when she was half way of bridge, she found that another goat was coming from opposite side of bridge.

At first, both goats asked each other to go back and give place to other to cross bridge first but none of them agreed.

After arguing for a while, first got thought and said, “Let’s try some other way. I will lie down on the bridge then you can safely walk over me and go to other side.”

When first goat lay down on bridge, second goat quickly walked over her and went to other side of bridge.

Then first goat got up and went to opposite end of bridge and by doing this no one had to go back and crossed bridge safely.

Moral:
Anger and Fight is not Solution for Problem. One should Think before Act.

Think Before You Act Stories: Losing Everything in Moment of Anger..!