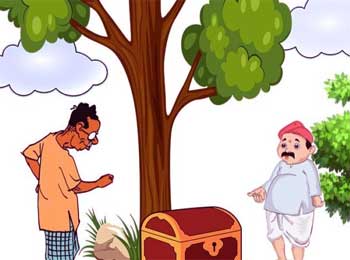 Once there was a rich merchant called Viraj. As time passed, his business got bad and because of that not only he lost all his money but also got into debt. So, he decided to sell of all his possessions to pay off his debt and then leave city. All he was left with was a heavy iron box.

Before leaving his city, he went to see his good friend Sonu. He took that iron box to his friend’s and requested him to keep it till he return.

His friend Sonu said, “Of course, my friend. I will keep it safe for you.”

Viraj thanked him and left. He traveled for many years and worked very hard. Soon he became rich again and decided to return to his town. When he came back to city, he bought a new house and set up a big shop.


Sonu knew about it. One day, after work Viraj went to his friends house. Sonu welcomed him warmly. They talked for long.

As Viraj was about to leave, he asked Sonu to return his Iron box.

Sonu who had kept that box all that time, got greedy as he knew that, when sold, it would fetch good price in market. Now he had no intention of returning his friend’s iron box

So, he put n a sad face and said, “Something bad has happened. I had kept beam safely in store room but mice there have eaten it. I am really very very sorry.”

Viraj understood what was going on his friend’s mind. He said, “Please don’t feel sorry. It’s not your fault that mice ate the iron beam.”

Sonu was pleased to see that Viraj had fallen for his lie.

Meanwhile Viraj asked his friend to send his son home with him, so that he could hand over the gifts he had bought for him.

Sonu immediately asked his son to go to Viraj place and fetch gifts.

Viraj took the boy home and locked him in one of room’s of his house. When boy didn’t return by evening, Sonu got worried and came to Viraj’s place to ask about his son.

Just then, Viraj said, “Oh! It was unfortunate. I wanted to tell you but didn’t have courage to come to you. While we were coming to my house, a hawk swooped down and carried off with boy. I followed the hawk for sometime but couldn’t keep pace. I am sorry my friend.”

On hearing this Sonu became furious and accused Viraj of lying and insisted that it’s impossible for hawk to carry off a fifteen year old boy. Where as Viraj kept on insisting that Hawk took him.

Quarrel got big and they both wen to court. There Sonu said, “Your honor, i had sent my son with this man to fetch some gifts from his house but my son has not returned since. This man has stolen my son. Please ask him to return my son.”

But Viraj still insisted that hawk carried off boy. Judge asked him, “How it is possible?”

Viraj replied, “If mice can eat up an Hugh Iron Box then surely a hawk can carry off a boy.!”

Judge understood that there was more to matter. He asked about it. Viraj explained everything in detail.

Judge had good laugh then he ordered Sonu to return Viraj’s Iron box and asked Viraj to return his friend’s son.