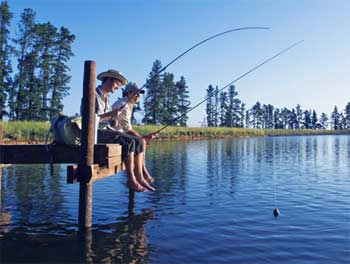 There were two fishermen who where close pals. They used to catch fish together on weekends. Since they were busy in their personal work and family, they hardly spend time together. It was a Saturday and they decided to drive to a nearby pond to enjoy their day in fishing. Also, they wanted to have some feast with the fish they catch.
Both carried essential utensils, cooking accessories, ingredients and fishing equipments. They reached the pond.

They sat at a distance and started hunting for the fish. The first fisherman got a big and beautiful fish in a few minutes. He was so happy and placed the fish in the ice box to retain the freshness. He decided to cook the fish as a whole fish in the noon. He spent some more time and captured a few more fishes. He decided to make a grand meal with the fish. Also, he froze a few fishes to take it back to home.

The first man was surprised at his act. He remained silent. The second man captured many big fishes, but he just put back all those fishes into the lake. Very annoyed by his act, the first fisherman angrily asked him, ‘Are you mad? Why do you put your fishes back into the water? They were beautiful and big!’


The second fisherman replied, “I know they were big, but I don’t have the big pan to cook the big fish! So I’m looking for a smaller fish that fits my cooking pan! The god is troubling me today.”

Hearing this, the first fisherman was surprised. He advised the second fisherman to cut the big fish into small pieces to suit in the pan and cook them properly.

Many people are just like the second fisherman. We are provided with handful of big opportunities, chances and even fortune that we many times overlook.

Moral:
God will always give massive possibilities as well as problems that we can handle effortlessly. Everything given to us is within our means.

You May Also Like: Making Most of Opportunities (Rich man and his Four Son Story)