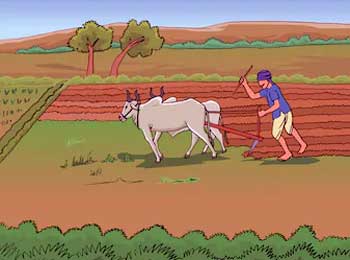 Once in a village lived two friends Nakul and Soham.

Soham was very hard working where as Nakul was religious and used to prayer all day and believed that he didn’t have to do anything because all will be done by God.

One day, they both bought a piece of land for farming.

Soham used to work hard in fields and Nakul used to stay at temple praying for yield of good crops. Likewise time passed and crops in field were ripe and ready to be sold.


They took crop to market and sold it at good price.

On coming home, while dividing money Soham said to Nakul, “I should get more money because i have worked hard in fields.”

Hearing this Nakul replied, “No, i should get more of this money because i prayed to God and only then we got a good harvest. You know nothing is possible without God.”

They couldn’t decide on whom should get more money. Therefore, two of them reached head of village and asked him about fair division of wealth.

After listening to both, Village head handed each of them a bag of rice and said, “Tomorrow morning, you both have to bring these bag of rice here after removing the pebbles from it. Only after that i will decide who should get more money.”

Both went back to their house with bag of rice.

After returning, whole night Soham stayed awake and worked hard to remove pebbles from bag of rice given by village head. On other hand, Nakul took that bag to temple and started praying to God.

Next morning, Both to them took their rice bags back to village head.

Firstly, Village head asked Soham for his rice bag. When checked, he saw that Soham had cleaned most of it.

Then he asked Nakul to bring his rice bag. Nakul bought bag and said, “I have full faith in God and i know rice must be clean by now because i prayed whole night.”

When Village head open Nakul’s rice bag, there was nothing changed. Pebbles were still there as it is.

Village head said to Nakul, “Soham bag has clean rice because he worked hard all night but yours rice bag is same as it was given to you.

Similarly, In fields, crops were able to grow because Soham worked hard, he planted seed and took care of crops till they were ready. Therefore, more money should be given to him.

Praying to God is right but you should not stop working. Only when you work, God helps.”

Nakul realized his mistake and apologized to Soham. After this Nakul too started working hard in fields with Soham and this time crops were even better than before.

Moral:
God help those who Help themselves.

You May Also Like: Working with Others – Moral Stories for Kids