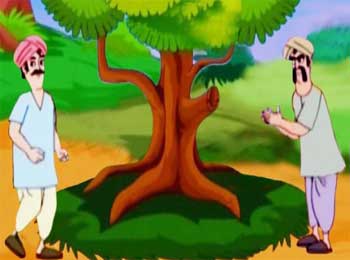 Long ago, in a village lived two friends, Dharmbuddhi and Paapbuddhi. One day, Paapbuddhi thought, “I should persuade Dharma to take me to far off land and earn lost of money through his business skills.”

With plan in mind, he went to Dharma and said, “My friend, We are getting older. If we keep on living here then we won’t be able to earn much but if we travel and move to other cities then we can earn a lot more using your talent.”

Dharma liked idea and they both set out for journey. During their journey, both of them earned lots of money due to business talent of Dharma.

After traveling for years. it was time for them to return home.


As they were entering their city. Paapbuddhi said to Dharma, “It is not safe to take home all this wealth. We shall bury most of our money in some secret place in this forest and whenever one of us need money, then we can come here and take whatever we need.”

Dharma agreed and then both of them dug a pit and buried most of their earnings in it and covered it carefully and left.

Later at mid-night, Paapbuddhi came went back to secret place in forest and stole all that money and brought it to his home.

Next morning, when Dharma went to Paapbuddhi asked him to come with him to forest so that he can get some money as he was in need of that money.

When both of them arrived at secret place and dug there, they found pit empty. At once, Paapbuddhi began shouting loudly, “Dharma, you stole the money and nobody else. This pit was covered carefully. You must give me the half of our earning that was buried there.”

Dharma denied and at this Paapbuddhi said that he will take this to dispute to court.

When case was presented before court, Judge asked them to produce witness, Paapbuddhi said, “I can produce Gods of forest as witnesses. They will determine who is guilty and who is innocent.”

Judge agreed. He asked both parties to be present next morning at forest for hearing.

Happy at Judge order, Paapbuddhi went to his father house and said, “Father, i have stolen all Dharma’s money yet I have filed case in court and i can win it only with your help. Otherwise, i will lose all the money.”

Father asked, “What i have to do?”

“There is a big tree there and you have to go there and hide in the hollow of tree. Tomorrow morning when everyone comes. I will asked in name of God, to tell you the truth. Then it is your turn to declare that Dharma is thief.”

Early morning, Paapbuddhi father left for forest and hide in hollow of tree.

When everyone came, Paapbuddhi shouted, “O God of forest, declare who among us is guilty?”

Father hidden in tree hollow shouted back, “Dharma is one who stole money.”

Just then Judge and others sat down to decide what punishment they should give to Dharma. Dharma understood Paapbuddhi trick and in meantime, he filled tree hollow with rags and hay and then threw a burning matchstick into it.

Fire started and Paapbuddhi father had no other choice, so he get out of tree and had to tell truth about Paapbuddhi plan and about him stealing all the money.

After listening to father’s confession, Judge punished Paapbuddhi for his misdeed.

Moral:
Avoid association of the Wicked or you may End up Paying for their Misdeeds.

Search Keywords: Short Moral Story about Playing Tricks on Others, Be Conscious about Company you Keep Friends Short Story