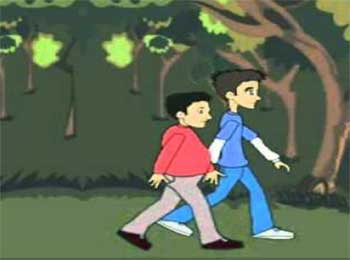 Once in a village, lived two friends sonu and monu. One day, they both had to go to another village for some work.

At this his friend monu interrupted him and said, “We both are traveling together, so you should say that we have got a beautiful sword.”

Sonu replied, “Oh no no, I saw this sword and got it. Therefore, it is mine only.”


Saying this he kept that sword beside him. Monu didn’t say anything anymore and two started moving forward.

When they were about to reach another village, a bunch of people appeared in front of them.

And suddenly one of those people caught sonu by neck saying, “I caught him, he is the murderer. He have sword used for murder in our village.”

Listening to this, sonu got scared and said to monu, “My friend, we are caught in trouble.”

At this monu replied, “No, not we. It’s only you who got in trouble.”

Just then people started to take sonu with him to put him in jail. Monu felt bad for his friend and cleared the misunderstanding caused because of that sword and got sonu out of that trouble.

Later, sonu apologized to monu for his selfish behavior and thanked him for helping him in time of difficulty.

Moral:
We should not only share our sorrows but also our happiness with our friends.

You May Also Like: Caring for Others – Moral Story for Kids

2 thoughts on “Two Friends and Sword – Story about Sharing”