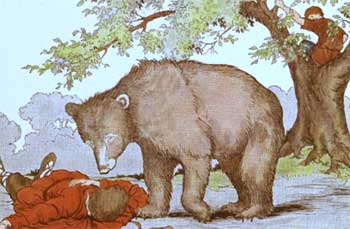 Once there were two friends going through forest. Being in forest they knew that there is danger of being attacked by dangerous animal in the forest. So, they decided to keep close to each other and promise to remain united even if they get in dangerous situation.

Suddenly, while they were on their way, they saw a very large Bear approaching them. Both friends got scared but instead of staying with each other, One of the friends at once climbed to a near by tree leaving the other one behind.

Other friend didn’t knew how to climb and was left on ground. He did quick thinking and He lay down on the ground breathlessly and pretended to be a dead man. The bear came near laying man and then smelt near ear and left the place because bears don’t eat dead bodies.

Now after the bear left friend on tree came down and asked his friend on ground, “What did bear said in your ears?”


Friend replied, “The bear advised me not to Believe a False Friend.”

Moral:
True Friend is the One who Always Supports and Stands by you in Any Situation.

You May Also Like: Two Friends and Talking Tree (Trickery Story)