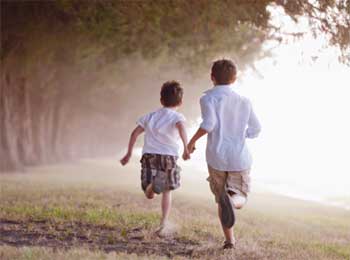 They used to do everything together like playing, sleeping, eating. Younger one was smarter and lean where as elder one was stronger and bulky.

One day there were playing and running behind each other, they entered forest near village. They were so engaged in playing that they didn’t notice that they were in the forest.

Suddenly Shinu slipped into a pit while running and started shouting and asking for help.


Mintu heard him and immediately ran back to him and without even wasting anything he found a long strong vine and threw it’s one end to Shinu while holding other end in his own hands.

Shinu was bulky while Mintu was younger and lean still he kept holding on that vine and tried for hours together to pull Shinu out of pit and finally after trying three hours, he was able to get Shinu out of that pit.

Both friends hugged each other and started running back to village.

In meantime, their parents got worried about them and started searching from them all around village. At last they started to go toward forest.

As they entered forest they saw both of them coming out. Parents were relieved to see them and hugged them.

After a while, everyone asked them where they were all this time. Both of them told everything that happened but no one in crowd believed their words.

One person asked Mintu, “How were you able to pull up a person who is double you size and weight?”

Still no one was able to believe them and thought they were making up story and started to scold them and asked them to tell the truth.

Then a saint who was passing by saw all this and listened to them. People were scolding kids saying that they were lying.

But Saint interrupted them and said, “Whatever children saying is absolutely true.”

A person from the crowd asked, “But how, How can a five year old pull out a ten year old kid out from pit?”

Saint replied, “Mintu was able to help because – There was No One near him to say You Cannot Do it, Even his Heart.”

Everyone in crowd felt ashamed and left.

This Simple yet Effective story tell us that there are two things that will stop you from reaching your goal. One is people around you who say “You cannot do it” and the other is “You yourself”.

Moral:
First- Belief in yourself. There is nothing you Cannot do Yourself. Everything is possible in this world if you have Strong Determination. Never feel that you don’t have the Capability to do things because you Never know what Wonders you can make.

Second – Never Listen to the people who Discourage you because they will keep quiet once you Achieved your Goal. So, be strong and take a step towards your success.