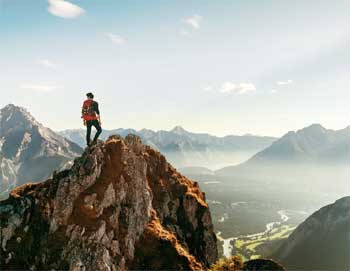 Once there was a man who used to climb mountains. One day he decided to climb a particular mountain and was so confident in his own abilities that he didn’t even bother doing research and plan beforehand.

On decided day, he packed up his gear and started his upward trek.

When he reached half way up, he stopped and had some food and looked over thanked God for everything he had and for giving him chance to see this beautiful world for this height.

Climber tarried a bit longer than he should have and soon sun was setting. Sky turned dark and clouds started moving in, man should have rest and continued going upward next day but still he continued on his mission.


Because of all clouds and heights of mountains, climber couldn’t see anything and lost his way. In daunted, man continued to climb mountains despite of his disorientation and confusion.

He thought God will guide and protect him and with his faith he kept climbing for hours and not even sure if he was moving up or down or sideways.

He continued climbing in night, growing cold – moving mare by instinct and what he think to be faith to guide his path.

And then, while reaching out over an outcropping ledge, he slipped and fell into air, failing at great speed. He kept falling, in moments of fear, all good and bad episodes of his life started to come to his mind.

He was thinking about how close death was getting, when all of a sudden he felt the rope tied to his waist pulled him very hard. He stopped falling and his body hung limp in air.

Only rope was holding him and in that moment of stillness he had no other choice and screamed, “Help me God..!”

All of a sudden a deep voice coming from sky answered, “What do you want me to do?”

God said, “Do you really that i can save you?”

Man replied, “Of course.. I believe.”

God asked, “Will you do exactly as i tell you?”

Man replied, “Of course, i will do whatever you ask of me.”

“Then trust in me and cut the rope tied to your waist – free yourself and your will be saved.”, God replied.

There was a moment of silence. Rope was only thing which was keeping man from falling, man began to weep and clutched tighter to rope and felt cold and darkness wrap itself around him.

Voice spoke to him no more.

Next morning rescue team reported that climber was found dead and frozen. His hands still clutched to rope.

He was hanging only three feet above the ground.!

Learning:
Do people Really Believe in what they say, They believe in? Can they really trust the Words of their Own Heart?

Trust God with Whole heart. Without God we lack eternal perspective.  Our view is Dim and our insight is Confined by our Narrow range of Experience.