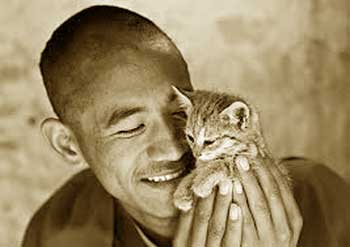 One day in forest, an old man was roaming around was he saw a little cat struck in a hole. He saw that it was struggling to get out of it very hard but still wasn’t able to get out.

So old man thought of helping it and gave a hand to get him out of that hole. But because of fear that car scratched old man hand. This hurt-ed the man and he pulled his hand screaming with pain.

Despite this attack of cat he again and again tried to give his hand to cat.

Another man going that way saw this and watching the scene, screamed with surprise, “Man!! Stop helping that cat. it is going to get itself out of that hole.”


Old man did not cared about what man said and continued saving that cat until he finally succeeded to get it out of that hole.

Then, he walked to another man and said, “Son, its cat’s instinct that make him scratch and hurt me. But it’s my job to Love and Care.”

Moral:
Treat Everyone around you with your Ethics, not with Theirs. Treat the People the way you want to be Treated by Them.

You May Also Like: King Invitation and Doubts..! (Zen Stories)