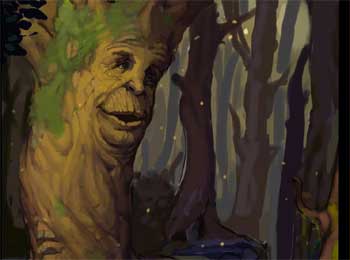 Once there was green forest on the edge of a village. In forest there were two young trees who grew next to each other and were close.

Many lions lived in that forest. They would hunt other animals and eat them till they were full and would leave remains of those animals near those trees. Due to rotten remains, a lot of stench spread in the forest.

One day both trees were discussing about it.

First tree said, “The air of the whole forest has become polluted because of these lions. There is such a bad smell here all the time. These lions should be driven out of the forest.”


Other tree nodded yes and said, “Right! We are all troubled by these lions. We should do something to drive them out.”

An old and wise tree who was near, listened to their talk and said, “You two are foolish. Think that we are safe because of these lions. Due to their fear, no woodcutter comes to cut wood in this forest. If the lions are gone, then we won’t be able to survive for long.”

Both trees paid no heed to the advice of old tree. They just wanted lions to leave the forest. So they thought of a plan to scare lions away. They included other young trees in their plan too.

One day, when lions were near by trees started moving in their places with aloud voice. They also got support of wind and their branches were shaking vigorously.

When lions saw this, they took as a sign of something bad going to happen in forest and got scared. Soon, they left forest.

Seeing this, both trees were happy and said, “Now only pure air will flow in forest and we will live in pure environment.”

Wise old tree saw this and said, “You don’t understand what you did. Now end of all of us is coming.”

Both trees laughed at old tree and continued with their fun. They were happy as there was no more foul smell of rotten meat and remains but their joy lasted only few days.

As soon as the word spread in the village that the lions had left the forest, some woodcutter reached the forest with an ax. Now they had no fear of lions and started cutting trees.

Seeing this, both the trees were very scared and started thinking that they should have obeyed the old tree but now nothing could be done. A few days later their turn also came and both were cut off.

Learning:
Before doing any work, one must not only think about advantages but also think about the consequences of their work. We should listen to Advice of our Elders.

You May Also Like: Be Honest – Old Man Advice