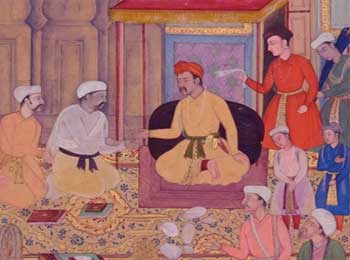 Once a traveler from far away place came to King’s court. Traveler seemed rich with dignified personality. He was wearing big and beautiful turban. No one in country had seen such turban, everyone in court started to talk about his turban as it was very colorful and was decorated with bright little things.

King also liked that turban and asked traveler, “You turban looks beautiful, from where did you bought this turban and what’s it cost?”

Man replied, “This is a very expensive turban. I had to spend thousand gold coins to get this turban.”

Listening to traveler reply one of King’s minister went to King and said in his ear, “Be careful! This turban does not seem to be worth more than 50 gold coins and he is telling you that he got it from thousand gold coins.”


Traveler saw minister talking to King and understood what minister must saying to King just by looking at his face. Traveler was no newbie, he had seen many courts and King and his ministers.

As soon as minister went back to his place.

Traveler said, “My Lord, Should i leave then? I was said that there is only one King in this world who is capable of buying this turban.”

Then he paused for a minute and said, “I have been to many kingdoms and everywhere i heard that there is only one King who was buy this turban for one thousand gold coins. Is this not the kingdom of great King who can buy this turban?

Is this is not the place i was looking for? Should i keep looking for the right one?”

Listening to this, King ordered his servant to bring two thousand gold coins and buy that turban. Seeing this minister was surprised.

After deal was done, when minister leaving court, traveler went to him and said, “You may know price of the turban but i know the weakness of the King.”

Learning:
Similarly, There are Many people who do not know God but still they pretend to be Messenger of God because they know weakness of human mind and they exploit that in name of God.

Remember, For the one who knows the Power of God, see No Weakness in anyone and one who Recognizes God, will Never Exploit others.

You May Also Like: Mountain Climber Story – Trust God’s Plan