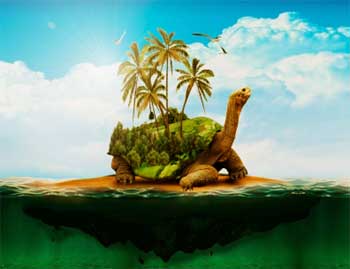 Once upon a time, there was tortoise who was on ship. One day ship sank. Tortoise swam for a long time and reached a deserted island.

The land side where tortoise came, led up to a big, steep craggy mountain.

Tortoise was tired from long swimming. He looked around but there was nothing on land to eat. To avoid starving to death, tortoise decided to climb to top of mountain, hoping that he can find something to eat, on other side of mountain.

Tortoise started to climb. As he got to snow covered summit of mountain, he was freezing cold. Suddenly a snow storm started.


Tortoise struggled hard but managed to make out a small pathway leading towards other side of mountain.

On path, tortoise saw from far that it was guarded by a big monster which was making a lot of noise. Tortoise was terrified to death.

Hearing to noises, tortoise was so scared that he wanted to hide his head inside his shell but he controlled his fear and looked around.

He saw that many other animals were lying dead. Tortoise understood that they all died due to unbearable cold.

Tortoise understood that if he stayed there for long then he will die too. He knew he had to find a way to escape from that place soon.

He rallied his spirit and gathered courage to move forward. Moving forward means he had to face that monster to cross that path which leads to other side of mountain.

As tortoise started walking toward monster, monster changed shapes. When Tortoise came very close to monster, suddenly, he realized that, it was actually a large pile of rocks which looked like monster from afar.

Those rocks were gather in such form that made shape like monsters.

While standing there, tortoise realized that sound he heard from far was just sound of wind blowing through a small cave.

Overcoming that fear of monster, tortoise felt confident and carried on his journey and eventually descended into a beautiful valley where he found plenty of food and water.

Learning:
By Avoiding any Situation One cannot Face the Challenges of Life. Something or the Other will Challenge us. It will Create Fear and Insecurity in Us. The only way to Deal with the Fear is to Face it with all Strength and Faith.

Most of the Fears will be Imaginary. Every Problem has a Solution. When our Mind is Clouded with Fear we cannot Act Rationally and Wisely.