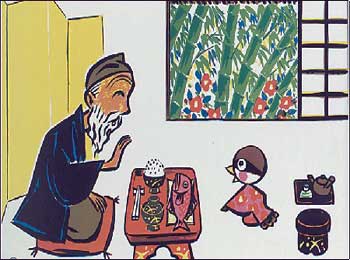 Once upon a time, lived a an old couple. Old man was kind hearted. He had kept a young sparrow, which he tenderly nurtured.

Where as old woman was cross-grained old thing and didn’t liked sparrow and always treated it badly.

One day, When sparrow had pecked at some paste with which old woman was going to starch her linen. When woman saw that, she flew into great rage and cut sparrow’s tongue and then let it loose.

In evening when old man came back home from and didn’t saw sparrow, he asked his wife.


Wife told him all that what happened. Hearing cruel tale, old man was sorely grieved and thought to himself, “Alas! Where can my bird be gone? Poor thing! She must be in so much pain.”

Old man wandered far and wide, seeking for his pet and crying, “Mr. Sparrow! Where are you? Where are you living?”

But couldn’t find it. Old man was sad because he lost his precious pet.

One day, at foot of certain mountain, old man met his lost sparrow. Both were happy to meet each other. Sparrow led old man to his home and introduced him to his wife and chicks, set before him all sort of dainties and entertained him hospitably.

Old man stayed there for some time and was treated royally by sparrow. At last, old man said that he would take his leave and return home.

When old man was about to leave, sparrow offered him two wicker baskets and begged him to carry then with him as parting gift. One of those basked was heavy and other was light.

So, old man said that as he was feeble and stricken in years, he would only accept the light one. Sparrow agreed. Old man shouldered it and left for his home.

When old man got home, wife grew angry and began to scold him saying, “Where have you been this many days?”

He showed her basket and said, “While on hills, I met my sparrow, he invited me to his home and introduced me to his family. When i came back, they gave me this basket as parting gift.”

When they opened basket, they were surprised to see what was inside. It was full of gold and silver and precious things.

When old woman saw all this, she changed her scolding and couldn’t contain her joy. She thought that if she also go to same place then she will be able to get many more things.

She said to old man, “I will go and call upon the sparrows and me a pretty present. So please tell me place where is sparrow’s house.”

Next day, woman set forth on her journey, following directions, she at last able to met tongue cut sparrow and exclaimed, “Well met! Mr. Sparrow. I have been looking forward to the pleasure of seeing you.”

She tried to flatter and cajole sparrow by soft speeches.

Sparrow invited old woman to its home but took no pain in treating her royally as it did to old man. When it was time for old woman to leave, sparrow didn’t offer any parting gift.

Still, old woman was not put off by this and asked sparrow fr something to carry away with her in remembrance of her visit.

Accordingly, sparrow produced two baskets, as before. Greedy old woman chose heavier of two and took her leave with it.

She couldn’t wait to check what’s inside, so just after walking a while, she opened basket but when she opened the basket to she what was inside, all sorts of hobgoblins and elves sprang out of it and began to torment her.

Moral:
We should be Greedy and Should Treat everyone Nicely.