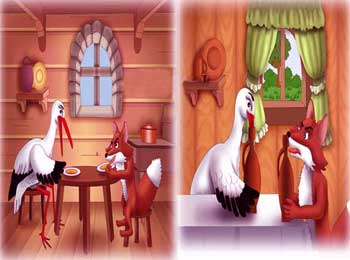 Once a fox and stork used to live in same forest. One day fox invited stork for dinner at his home. Stork happily accepted his invite and next evening stork went to fox’s house.

Fox opened door and welcomed him to his home. They sat there and spent time talking. Soon it was time for dinner.

Fox bought freshly cooked soup to the table and it smelled delicious. Stork was happy to see food as it was feeling hungry and ready to eat food.

Fox was selfish and didn’t wanted to share his food despite inviting his friend stork to his home. So he served soup for both of them in shallow bowls.


As bowls were shallow, fox quickly licked up all his soup. However bowls were to shallow for stork’s long beak to have soup and because of this despite feeling hungry poor stork just smiled politely and stayed hungry.

Selfish fox with wicked smile on his face asked stork, “Why aren’t you having your soup? Don’t you like it?”

Stork calmly replied, “It smell delicious but my stomach is upset that why i can’t have it.”

Later stork left his house thanking him for dinner and inviting him to his house for dinner. Fox happily accepted his invite and next day he went to stork’s home in evening.

Stork opened door and welcomed him to his home. Both sat there talking. Soon it was dinner time.

Dinner table was set and fox saw that for dinner stork bought freshly made soup at dinner table. Fox was ready for having dinner as it smelled delicious.

Stork served soup in tall jugs and drank soup easily but as jugs were tall fox was not able to reach inside of jug with his tongue. This time it was fox’s turn to go home hungry.

After finishing her soup, stork asked fox if her enjoyed soup. Fox remembered dinner he himself had given to stork.

Fox understood his mistake and felt sorry for his behavior and left.

Moral:
We should not act Selfish with others. As it is said, “What goes around.. comes around..”

One thought on “Tit for Tat Story – Selfish Fox.!”